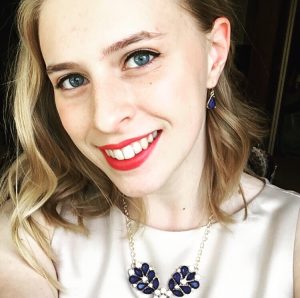 Major: English creative writing
Hometown: Palco, KS
Favorite writer: My favorite novelist is Neil Gaiman. I also enjoy reading stories written by a few student journalists at K-State.
Favorite sex scene from a movie/TV/book: There's actually an interesting sex scene in my favorite novel, which is American Gods by Neil Gaiman. Bilquis, one of the old gods who works as a prostitute, "eats" a client with her vagina during sex. For real; he's gone. It's interesting, to say the least.
Hidden Talent: I sing pretty well; I'm a classically trained soprano. https://www.facebook.com/dene.dryden

Innovations by Women are the Future of Reproductive Health

With the rise of women worldwide entering STEM fields, more and more modern-day innovations are created by women and girls. We are also seeing more businesses run by women, creating new products and enhancing old products for other women and female-bodied people. Female innovators in every field are important, and their contributions to society are valuable. In particular, women and other people creating great products that positively impact reproductive health are critical, and should be celebrated. First, look at LOLA. It’s a company that sells “tampons and pads by women, for women.” Their products are different because LOLA is straightforward with what materials they’re using; for example, their tampons are 100% cotton. LOLA’s founders, Jordana and Alex, came up with the idea for their product by considering a simple question:… Read more » 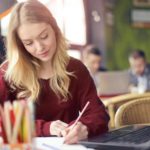 I have written about the importance of sexual education and why there is a need for more comprehensive sex ed programs in the United States: to provide an education on condom usage, hormonal birth control, consent, and healthy sexual and romantic behaviors. Real sex education can also help break down the stigma attached to sexuality, and our reproductive organs. One reason to promote comprehensive sex education that many people overlook is to include conversations on male and female reproductive organs (plus the more common variances that occur with intersex individuals). Yes, promoting the use of condoms and learning about more than abstinence is great, but learning about our own bodies is extremely important. Teenagers learn about their muscles, their digestive systems, and their brains in high school. Why not their… Read more »

When Birth Control and Anxiety Meet 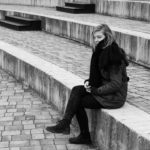 When I arrived for my first appointment with Kansas State’s Counseling Services in October 2017, I cradled an iPad in my hands and filled out a digital intake form. It asked me how concerned I was about certain factors in my life, like my anxiety symptoms, personal relationships, relationships with my body image and food, and all that jazz. When asked about medications, I reported just one: the allergy medicine I’ve been taking since I was a child. I forgot to mention my NuvaRing; it was a new medication and, since it is not a pill, I forget it is actually a medication. I wish I had mentioned it. Maybe my semester would have been smoother. I have not been diagnosed with general anxiety or anything of the kind, but… Read more » 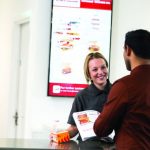 Last semester, I worked as an usher in my university’s basketball stadium. Overall, it wasn’t a bad job; I was getting paid for watching basketball games. However, the job required me to stand at the top of an aisle for about eight hours. Patrons often said hello to me as they went to find their seats, sometimes asking for directions to the closest bathroom or their seating area. But, there was one time when a man tried to hit on me while I was working. He showed me his ticket and asked which side of the aisle his seat was on. To my memory, as I gestured to one side of the aisle, he saw a ring on my finger. “You’re already engaged? How old are you?” I told him… Read more »

Why I Put a (Nuva)Ring on My Busy College Schedule

We have more birth control options now than ever. With advancing medical technology, scientists have been able to offer effective hormonal birth control in many different methods. One of the most infamous method is the pill. The advent of the birth control pill as we know it today came from the efforts of activist Margaret Sanger and endocrinologist Gregory Pincus, with contributions to synthetic hormone studies by other scientists. The first oral contraceptive was approved by the FDA in 1957 to treat menstruation issues, then again in 1960 actually as a contraceptive. Since then, more birth control options have been tested and approved for use, and many aim to reduce human error with the medicine. One of the drawbacks of the standard birth control pill is that a person needs… Read more »

When I first became sexually active, I never bought my own condoms. I had this preconceived notion that the male partner in a relationship was the one responsible for buying condoms. It also did not help that I lived in a very rural town in northwest Kansas where the local grocery store did not sell condoms, nevermind emergency contraception or pregnancy tests. Looking back now, I realized that my belief around who buys condoms was a byproduct of a higher social norm for relationships: the man is in charge. The man is supposed to make the first move, ask the girl on their first date, and initiate sex. Since men are the ones expected to initiate the sexual part of the relationship, they supply the condoms. And in a way,… Read more » 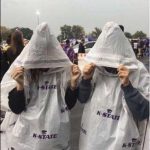 This weekend, a Kansas State student shared a picture on her Snapchat account that rebounded throughout the student body. The picture was taken at our most recent home football game against Texas Christian University, which was delayed three times due to weather. The picture features two other people in white rain ponchos with the hoods up, masking their faces. According to the caption, they are members of the “Kstate [sic] Kool Kids.” The obvious problem here is that they referenced the KKK. This paints K-State and its students in a bad light, so many people have been upset over it. As it became a big talking point on campus, the Collegian, our campus newspaper, covered the story scrupulously. I am a copy editor for this publication, so I helped check… Read more »

Earlier this week, the House of Representatives passed a bill (H.R. 36) that, if approved by the Senate and the president, would outlaw abortions after 20 weeks For many, this seems like a good thing; if you restrict how many abortions can be performed, then less people will have abortions. This is wrong. According to Planned Parenthood, about 99 percent of abortions occur before the 21 week mark, and most abortions performed at 21 weeks or after are requested because of severe health concerns to the fetus or the pregnant person. The bill as it stands now, does make exceptions for abortions after 20 weeks if an abortion “is necessary to save the life of the pregnant woman, or when the pregnancy is the result of rape or incest.” In the… Read more »

White Nationalism Is a Problem Kansas State Needs to Face

Last Wednesday, Kansas State students woke up to find white nationalist posters put up all across campus. I personally did not see any on my route to class, but plenty of students did, sparking a reaction throughout the university. From what I saw on social media, there were four different variations of the posters found on campus. The first one that I saw echoed a “White Lives Matter, Too” mentality, stating that “diversity means less white people.” Two others specifically mentioned Muslims and terrorism. The last one featured a picture of a white family, saying “We have a right to exist.” The amount of hypocrisy these posters portrayed is alarming to me. Of course white people have the right to exist, as all people have the right to exist. But… Read more »

Last week, I attended the Protecting Sexual Health in Kansas forum at Kansas State University. Speakers Jennifer Greene, director of the Riley County Health Center, and Micah Kubic, executive director of the Kansas ACLU, discussed the state of sexual health care in the country and in Kansas, specifically Riley County. Greene called Riley County a “contraceptive desert” as it only has two publicly-funded clinics that offer a range of family planning options. Many of the surrounding counties in the area don’t have a single clinic like that, so the need for contraceptive services are greater there. Looking at the entire state, Greene said that in 2010, 45 percent of pregnancies in Kansas were in unintended. In Riley County alone, 9,190 women (aged 13-44) are in need of publicly-funded sexual health… Read more »