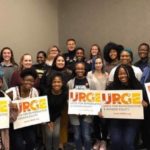 URGE is working to build a chapter at Alabama State University in Montgomery after strong participation from ASU students at the 2019 Reproductive Justice Leadership Institute (RJLI).

It’s official: Our first HBCU (historically black college or university) chapter is up and running! We are so excite to see what ASU students do in the coming semesters to encourage their peers to fight for reproductive rights nationwide. Check out some of their student members, reppin’ URGE so, so well!