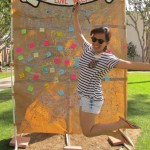 URGE at CSULB  asked several partners to join them in encouraging self love for students for an entire week. They set up a banner where students could write what they loved about themselves. Additionally, partners set up booths including a “yay scale” which replaced numbers on a scale with positive affirmations whenever someone stepped on it, a table with body paint to create temporary tattoos, and a table to take shameless selfies. The event used the hashtags #selflove #urgecsulb

CSULB gets the recognition they deserve!

Congrats to our chapter at Cal State Long Beach for winning the Bell Hooks Transforming Lives Award from the CSULB Women, Gender and Sexuality Studies department! A special shout-out to chapter leader Amber Melvin, who also won the CSULB President’s Commission on the Status of Women Student of the Year Awards! Way to kick ass!

In evaluating the services in the campus health center, they found major gaps in resources for LGBTQ students. Chapter members worked with the center to get cultural competency training for health center staff.

CSU Long Beach makes a habit of not messing around. The URGE chapter kicked its organizing efforts into high gear in response to the attacks that have been launched against our access to preventative services and reproductive healthcare, in particular the threats to Planned Parenthood funding. This month, they were able to effectively lobby the student government to pass a resolution opposing any legislation that would defund Planned Parenthood. One small step for student government and a huge step in showing the power of our movement. This goes to show how important reproductive and sexual healthcare is to students all over the state of California.