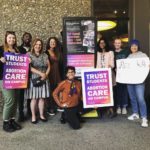 Students United for Reproductive Justice (SURJ) was formed in 2015 at the University of California, Berkeley. SURJ was the first student group to organize directly on campus to bring medication abortion to their student health center. After their advocacy efforts were ultimately shut down by the UC, they partnered with the reproductive justice team through the Women’s Policy Institute fellowship program and Sen. Connie M. Leyva to introduce state legislation requiring all public universites to provide abortion care on college campuses. SURJ cosponsored two bills and lead student organizing efforts to push Senate Bill 24, the College Student Right to Access Act, through the finish line. SB24 was signed into law in October, 2019.