On May 17th, students from the Fail Campus Carry group attended to protest the monthly Kansas Board of Regents meeting by wearing cloths with NRA spray painted on them over their mouths. They were redirected from the meeting room to a side room, where they could only listen to live-stream audio. During this meeting, they were discussing the upcoming campus carry law and how KU weapon’s policy is different than the rest – it requires people with guns that are in backpacks or coats to have those items on them. They ruled to have KU change in accordance with the rest. During the break, one KBOR member came in the room to listen to the student’s concerns, but ultimately said there was nothing KBOR can do. After the meeting, the… Read more »

This fall students at KU have been actively organizing on campus to let administrators know that the current guidelines for handling sexual assault cases reported to the University don’t go far enough. Members of SURGE have been active participants in this movement, but the movement itself has reached beyond the core group of student activists who started it and has progressed into a campus wide conversation.  Students started the conversation about the mishandling of sexual assault cases by administrators on social media with the #aGreatPlaceToBeUnsafe and the creation of a video with demands.  In this call to action from students to administrators students are telling prospective jayhawks not to attend KU next fall until these demands are met.  For more information about what is happening at KU follow the University… Read more » 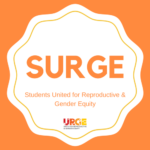 Students Unite for Reproductive and Gender Equity (SURGE) at The University of Kansas (KU) is a student group and that advocates for reproductive rights and justice for all both on and off campus. We host sex positive and informational events throughout the academic year as well as host learning opportunities weekly for students on different RJ topics. Our chapter works closely with the Emily Taylor Center on KU’s campus to promote intersectional feminism. Find us on Instagram @surge_ku or Students United for Reproductive and Gender Equity at KU on Facebook!

Today, a major rally was held at the Kansas statehouse to oppose the proposed bill to legalize discrimination against LGBTQ folks. Our chapter at the University of Kansas showed up big time – with one leader speaking and others sporting these fabulous signs!

The chapter has already recruited over 150 people to send a message to Congress to end Title V funding through our Sex[+] Voter Engagement Campaign and they joined with other student organizations to host a spectacular Sextival.