UTEP uses Nail Art to Fundraise for the West Fund

The URGE chapter at the University of Texas El Paso held a nail art fundraiser in support of the West Fund. Complete with a glittery uterus, UTEP raised over $400 in a a few hours. The funds will be used to support abortion care in the Southwest region of Texas. The chapter also received some attention in their campus newspaper, with quotes from campus leader, Gina Lawrence.

In 2012, there were 41 abortion providers in Texas. Today there are 19. Under the Texas law HB2, 12 more will close starting Sept 1st, 2014. That’s why our chapter at the University of Texas, El Paso led the effort to create a new abortion fund to serve their community. With help from URGE staff, the new West Fund has been working to raise money for pregnant people seeking abortions.  The West Fund is busy fundraising and building relationships with abortion clinics and advocates in the area. They plan to launch in early September.  If you are interested in giving to the West Fund, you can donate here. 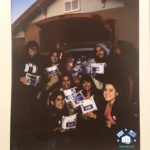 Frontera Folx for Reproductive Justice is a student-ran organization at the University of Texas at El Paso on the U.S/Mexico border. The student chapter hosts weekly meetings to learn about reproductive health, rights and justice. Topics include contraception, Texas policy and how to gather those resources and make them easily accessible to the community. The chapter also hosts monthly debate watch parties, hygiene product drives and plenty of volunteer opportunities at community events. You can follow them on Instagram and Facebook at @FronteraFolx.

Texas Leader Writes About Her Experience as a Young Parent

Kathleen, one of our student leaders at UTEP, wrote this moving piece about becoming a young parent as a part of the Strong Families Mama’s Day celebration. Read the whole piece here.

El Paso Registers Over 700 Voters in One Day!

They continued to register until the Texas deadline and racked up a grand total of 1200 registrations.