Speaking Out: A Reproductive Rights Panel Discussion at Wichita State

Former President at Wichita State Wins at Voices for Choice

On May 2nd, Voices for Choice, an event organized by PPGP, Trust Women/TW South Wind Women’s Center, MainStream coalition, Kansas ACLU, True Blue Women, and the National Council of Jewish Women was well attended by pro-choice advocates and activists from across the state, ready to lobby against HB 2319/SB 98, otherwise known as “the font bill”. For the awards ceremony, The Next Generation Award went to Nigel Morton, former FOCUS President at WSU, The Outstanding Ally in Government Award went to Senator Oletha Faust-Goudeau, Ranking Minority on the Senate Federal and State Affairs committee, and the Dr. George Tiller Courage Award went to Pedro Irigonegaray, civil rights attorney. In total, there were over 60 attendees!

URGE’s Wichita State University’s chapter, Feminists on Campus Uniting Student (FOCUS), supported The Vagina Monologues over the Valentine’s Day weekend with the WSU Community Psychology Association and WSU Office of Diversity and Inclusion. $2,600 was collected for Wichita Area Sexual Assault Center (WASAC) and a large amount of donations were collected for the Wichita Family Crisis Center. The chapter leader, Nigel Morton, also participated in a panel discussion after the performance! 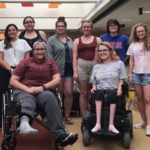 Feminists On (and off) Campus Uniting Students (FOCUS) is focused on empowering students at Wichita State University to be unapologetically abortion positive and sex positive through education about reproductive justice issues. We have bi-weekly meetings during the school year. Follow us on Instagram and Twitter @Feminists_WSU!

Earlier this month students from our chapters all over Kansas traveled to the state capital to talk with their representatives about the importance of sex education. Wichita State leader Paul Brink was among those students and when we went back home to Wichita, the events attracted the attention of the local news station. Click here to watch the video of Paul talking about the lobby day.

Recently my URGE chapter at Wichita State hosted the president and founder of the Keep Girls Safe Foundation Sien Lengeju. Keep Girls Safe’s work is focused on ending female genital mutilation (FGM) in Kenya and here in the States. Before hosting the presentation, I was slightly aware of the issue across the Atlantic but completely ignorant to the problem in our own country, and I know many others are just like me in this. So I want to share a little bit of what I learned to help spread awareness for Keep Girls Safe’s cause. There are three common terms for FGM which are female genital mutilation, female circumcision, and female genital cutting. Each term carries its own respective connotation that give a different meaning to the human rights violation…. Read more »