Landmark Cash Bail Reform: The Decriminalization of the Poor

Harris County, Texas encompasses a vast amount of land in the greater Houston area. The county has a population of 4.653 million Texans. It is the nation’s fourth-largest city with the third-largest jail population. The overloaded and overworked jail system is rampant with thousands of Texans serving time while awaiting trial because they cannot afford bail. The bail system has led to the unjust incarceration of poor defendants who cannot pay their bond. It has also led to the gross misconduct of judges. There have been several instances of judges increasing defendants’ bail with petty justifications. The system discriminates against poor and presumably innocent defendants. 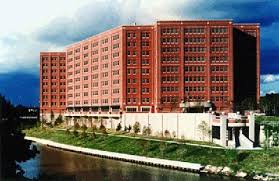 In 2016, three people with misdemeanors charges filed a lawsuit against the county under allegations of unfair incarceration because of excessive bail amounts. The following year, the Harris County bail system was deemed unconstitutional by the chief district judge of Texas, Lee Rosenthal. The county changed its bail system to grant personal recognition bonds for the majority of non-violent misdemeanor defendants. A personal bond requires no security payment. The defendant does not have to pay to await trial outside of jail. The defendant makes a promise in front of the judge to appear at all future court dates. 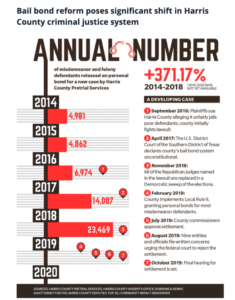 The settlement also required the county to create an “open hours” court where defendants could reschedule hearings if they missed their court date. The county was also required to provide free legal services if defendants were given a cash bail bond.

Some officials have raised concerns that the cash bail reform will lead to an increase in crime rates and caseloads for local judges. The reform allows local judges to determine on an individual bases if a case permits a personal recognition bond. Another critique is the risk posed to the community if a person is released on a personal bond and could commit another crime. However, following the 2018 midterm elections, many of the judges that opposed the cash bail reform were elected out of office and replaced. Many of the newly elected judges began practicing the new personal bond system for the majority of non-violent misdemeanors cases. Even District Attorney Kim Ogg has advocated against the personal bond system stating that judges are letting dangerous offenders out. Her objectives stem from claims that the new system does not do enough to protect victims’ rights. 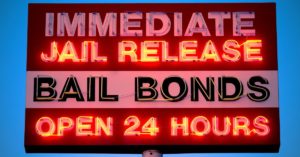 This landmark reform has huge implications. The bail reform could help alleviate overcrowding in the Harris County jail system. Many of those filling up the jail system are people that are innocent under the guise that everyone is innocent until proven guilty in a court of law. However many arrestees are held in jail for weeks or even months solely because of their lack of economic resources. According to data from the Texas Commission on Jail Standards, the average monthly number of people held in the Harris County Jail pretrial for misdemeanors dropped about 40% between 2016 and 2019 during the period of the bail bond reform. The bail bond system across the nation has come down to privilege and wealth. The rich can purchase their freedom while poor Americans are slapped with huge bails, presumed guilty and jailed based on racial prejudice and economic status. 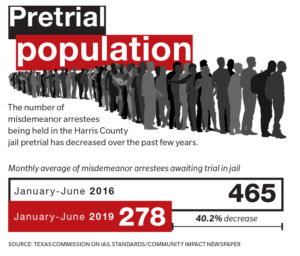 Many defendants have no other option, but to enter a guilty plea to avoid a lengthy, complicated trial and process. The disruption that criminal charges bring to a person’s life is devastating. Incarceration comes with a mountain of cascading financial problems. Court dates and serving jail time jeopardizes employment along with multiple court fines. The effects are disastrous to people’s already fragile economic situations. The societal cost of a criminal record, however, is even more catastrophic to a person’s life. It impacts people’s ability to find housing, prevents folks from accessing employment opportunities, can lead to the expulsion of driving privileges, loss of child custody and immigration issues. The cash bail and bond system has disproportionally harmed low-income and Black communities. Thousands of poor, Black, and brown folks are forced to lose their jobs, homes, and children because they cannot afford excessive bail.

The modern-day bail bond system is a racist and classist method to imprison low income, working-class, brown and Black Americans. It throws away the presumption of innocence by incarcerating folks, not for their crime, but their economic status. The cash bail system exploits and criminalizes poor people. The concerns raised by officials are a drop in the hat in comparison to the irreprehensible damage it has done to individuals and communities. It is time to stop punishing people for being low-income. It is time for the cash bail system to be abolished and it is time to free innocent people.