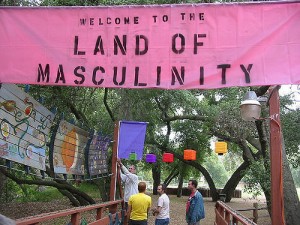 With a growing awareness of trans existence and experiences, feminist spaces are gradually making more explicit efforts to include trans people. Historically, considering the reduction of trans narratives to men in dresses co-opting women’s experiences or butch lesbians with internalized misogyny motivating trans identity, revision is needed to move towards true trans affirmation. This hostility has primarily been dispensed by trans-exclusionary radical feminists (TERFs) who position trans women as indistinguishable from men and thus part of the collective patriarchal oppressor. However, trans men have not been excluded with the same vehemence. While trans women are virtually disposable, trans men are clung to with the ludicrous belief that their stakes in womanhood are more legitimate than a woman’s simply by virtue of their gender assignment at birth.

Aside from the horrific, controlling images persisting today as harmful and deadly cultural stereotypes, they also facilitate the openness towards transmasculine people over their transfeminine counterparts. This completely disregards the process by which trans men come into their maleness/masculinity and their tendency to reify, rather than challenge, toxic hegemonies. Event descriptions such as “NO CIS MEN” show a misguided correction to second-wave exclusion, as transfeminine people can still feel excluded by this, but also because it implies that trans men are unlikely or incapable of misogyny and sexism as a result of their socialization. The contradictory nature of creating anti-patriarchal spaces while including trans men is evident in the concept of “passing.” As trans men’s identities often hinge on reproducing and reifying hegemonic masculinity, the systems of domination that are being contested can actually be re-inscribed within feminist spaces.

Doing gender is defined as “…creating differences between girls and boys and women and men, differences that are not natural, essential or biological” (West & Zimmerman, 1987). Essentially, doing gender means performing distinct, historical differences between women and men and using these differences to account for present gender inequalities. For trans people in particular, doing gender also means performing competency and taking into account the consequences of failure. While cisgender people may be criticized for incorrectly displaying their gender, their failure does not come at the cost of discrediting it. Being able to perform gender in-line with appropriate standards of masculinity is complicated by trans men’s socialization which demands they not only learn appropriate decorum for men but unlearn any practices that may lead to being perceived as women.  The process of “doing” gender for trans men is even more nuanced as to “do” gender, gender must first be “undone.”

Gender is typically “undone” by completely disassociating from anything that is considered “feminine.” Long hair must be traded in for squared cuts and anything pink must be trashed. Beyond the physical aspect of “undoing” gender, it also must be undone psychologically. Reaching far back into one’s childhood in search of narratives consistent with the “having always known” trans archetype is crucial to strengthening claims of gender membership, regardless of whether or not they are true. With the reliance on cis ways of knowing gender to validate trans identity, gender is not being radically contested or challenged, but merely achieved at a comparable level of acceptability from a different angle. Instead of highlighting this shift in gender activity as a way to bolster claims to male gender membership, trans men frame these new activities as naturally following from identifying as men, perpetuating the belief in essential differences between women and men.

Trans men challenge the false sex/gender relationship by showing that maleness/masculinity can be achieved regardless of assigned gender, but the fundamental differences between men and women are still maintained. The process through which trans men reach their desired gender destination is undoubtedly more difficult than a cis man’s, but the destination is more or less the same and thus has equally harmful potentials to subjugate women and uphold hegemonic masculinity.

Making one’s gender visible requires adherence to normative conceptions of attitudes and activities appropriate for one’s gender. In trans communities, this often appears in the emphasis placed on “passing.” In the context of gender, passing refers to an individual’s ability to be read and treated as a cis person of their respective gender. Cis people and cisnormative conceptions of gender serve as the marker of “passability” and following these standards can be important for personal comfort and avoidance of misgendering and others forms of violence.

Entire websites, blog posts and YouTube videos are dedicated to collecting tips that make “passing” as male more seamless. There are the less harmful tips, such as going to a barber instead of a salon or using a binder to conceal one’s chest which generally promote self-comfort and confidence. However, there are also really problematic tips, usually shared by white trans men who posit achieving hegemonic masculinity as the ultimate goal for trans men. “Man 101: The Brutally Honest FTM guide” is a Tumblr blog dedicated to “…point[ing] out common mistakes that can lead one to being misgendered and giving advice on how to look as biologically male as possible.”

In a post titled, “Why You don’t Pass. Part I,” three tips are provided in order to override “…a lot of common stupid traits that trans men have.” On the third tip labeled “lose the girly voice,” the blogger expresses annoyance at trans men who are hurt by being misgendered, yet have a “feminine” voice. After the tirade, they write:

Again there is nothing wrong with being a man who’s effeminate, but saying “psh”, “like”, huffing  and rolling your eyes whenever something discomforts you is NOT helping you pass. This can all be put aside as the standards for masculinity vary per person, I respect that. However, this is for people who want to pass as a man. You are still an individual and there is no pressure to be macho or anything, it may not be who you are. However, when you’re pre-transition and sound feminine, people will figure you’re a female. You can’t expect them to think otherwise.

While puberty does usher in a voice drop for people assigned male at birth (amab), there are also elements of adult voices that are produced through the ways we are socialized. Assigning a gender to a voice typically relies on a combination of elements, including pitch, vocal inflection, and volume, all of which are controlled for people assigned female at birth (afab) whose voices are disciplined to be softer, less demanding and more polite. Rather than understanding voice as a product of socialization, vocal differences between genders is naturalized as an innately different characteristic between women and men which can only be altered hormonally. This again basis vocal differences between genders in biological matters and necessitates testosterone to be able to pass, creating a narrow margin of what it means to be a man. Considering the costs of testosterone, only certain types of trans men are then able to achieve this respectable level of passability. For trans men who do not have access to clinics offering hormone replacement therapy (hrt), can’t afford hormones, don’t have insurance or are unable to physically transition for fear of losing their jobs, passing is not always possible or a priority. Already, trans men of color and working-class trans men who are less likely to have access to these resources are weeded out from the realm of passability, and thus the social capital that white trans men are able to cash in on.

Although it is suggested that there is room for individual ideas of masculinity, the writer makes a clear distinction between individual displays of masculinity and those that enable “passing.” Gender displays that are inadvertently masculine also tend to be those that are the most toxic: ie:  man spread in public spaces, seem less interested when close friends are speaking, or stare at women’s breasts when they walk by. With other tips titled “The fuck are you wearing?” and “Nice buzzcut, butch!”, it is clear that the type of masculinity that is being alluded to is hegemonic. Since hegemonic masculinity relies on the subordination of other masculinities and all femininities, trans men who are able to adhere to these standards must take part in the subjugation of those most marginalized. Regardless of the assumption that trans men “see both sides of sexism”, it doesn’t undercut the privileges that upholding hegemonic masculinity affords them and the misogyny that’s built into their identities.

While this blog may seem like an extremist outlier, dozens of them exist, meaning that there are multiple trans men who feel passionately enough to produce these quasi-resources. This also means that these resources are being consumed, likely by young trans people recently coming into their identity for whom “passing” may be a primary concern, regardless of how questionable the advice is.

Although trans people have helped sever the mental link between sex and gender, gender as a social construct has been rejected by few, the rest of whom often reify its existence. Because the main function of gender is social control by legitimizing inequality, trans people don’t inherently subvert gender simply by being trans.

As transmasculine folks in particular, we need to be more critical about our positions and our culpability in reifying the gender hierarchy. While our male/masculine privilege may operate differently than cis men’s, this does not negate its existence. Often times, our replication of maleness/masculinity is nearly identical and equally as toxic. We cannot assume that our socialization makes us less prone to participating in toxic masculinity and absolves us from creating our own intracommunity standards that subjugate out trans siblings. We must be active, we must be vigilant about how we act out our masculinity subjugates and commits violence on others.

Passing, while a legitimate safety concern, should not be contingent on participating in systems of domination. Being trans is an experience that offers radical potentials for gender self-determination wherein we can create new masculinities — trans masculinities that define masculinity not by our ability to consume space, but our ability to make space. To make room for the feminine in our lives and within ourselves. Until trans masculinities are refashioned in a way that fundamentally challenges hegemony, our acceptance in anti-patriarchal spaces must not precede our own self-interrogation.