The Supreme Court is poised to release a decision on the King v. Burwell case any day. This case may have not received the attention it deserves for its possibly devastating outcome, especially for young people. Many people have discussed this case in terms of tax credits, something that young people may not think about very much. However, if the plaintiffs are successful, it would mean that any state using the federal government’s infrastructure for its healthcare exchange would not be able to receive federal financial assistance. Currently, that financial assistance in the form of tax credits helps low- and middle-income people pay their monthly insurance premiums. Without that assistance, monthly payments will increase substantially. For example, in Alabama where the average monthly insurance payment in 2013 was $178, that… Read more »

You might be familiar with something used to critique the film industry called The Bechdel Test. In 1985 it was created by a cartoonist named Alison Bechdel as a way to measure female representation in films. The test has three easy parts, A film has to have at least two women in it They have to talk to each other They have to talk about something other than a man Seems simple enough? Amazingly however today still about half of films don’t pass the test. As the test remains a good starting point for critiquing our film consumption I wondered if the test could be applied to other fields as well, like television or music. Then I found an article written for Pitchfork by Paul de Revere that adopts the Bechdel Test… Read more »

I’m sure by now most people have seen or read about the video that was taken of members of the SAE chapter at Oklahoma University chanting racial slurs. There have been countless articles written on it, tons of media coverage, and lots of social media interaction. The hashtag #SAEHatesMe has been used to talk about all sorts of issues relating to racism in Greek life. After this video surfaced, OU president David Boren issued a statement condemning the actions of this group. I should applaud the administration for their swift action, but I also think that making a statement that “Real Sooners are not racist” is a little bit ironic. However, the statement issued was undoubtedly further than the University had to go to deal with the problem, and going… Read more »

California has a reputation for being an incredibly liberal state filled with hippies and surfer dudes, but as a California native, I can tell you that such stereotypes are far from the truth. A good deal of the state is actually very conservative. How else do you make sense of a same-sex marriage ban successfully passing when left to the voters back in 2008, in this, one of the most liberal states in the nation? It’s because of this knowledge that I wasn’t all too shocked when I found out that there’s an abortion initiative gathering signatures to mandate parental notification for teenagers. It’s important to realize that California already has a law on parental notification, but it’s not really enforced. What this measure would do is force a pregnant… Read more » 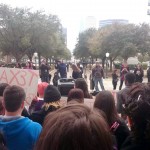