The Impact of Rape Culture on our Campuses

As a society with an increasing rape culture, many instances of sexual assault and violence are not reported because survivors are shamed by law enforcement or looked down upon by society. Sadly, this behavior is rampant in American culture today. The public perception of a rape victim is a young woman who is either intoxicated, displaying sexual promiscuity, or a combination of both. Despite what the public thinks, rape is not an anomalous event. According to a study by the Center for Disease Control (CDC), one in five American women will be raped or attempted to be raped in their lifetimes. This problem also affects students in higher education. A recent MIT survey found that 17% of female undergraduates experienced one or more unwanted sexual advances during their time in college. 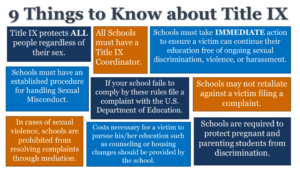 Many college campuses today grossly mishandle rape cases and downplay the severity of the situation. Most rapists on college campuses receive little to no punishment from the administration. Sadly, much of the problem comes from the justice system and the public mindset. Many survivors have trouble reporting their sexual assaults due to the stigma or the police. Many of them undergo serve psychological and emotional trauma after the sexual violence and some may even have suicidal thoughts due to sense guilt as shown in studies by the Rape, Abuse, and Incest National Network (RAINN).

The solution to rape culture in America is education. It’s also a shift away from advertising and media that portray women as sex objects. One step toward this solution is comprehensive sexual education nationwide. This would ensure that starting from adolescence, people have a basic understanding of consent and how to handle situations of sexual violence. Another solution involves comprehensive training for police officers. Training that would teach officers to treat survivors with the sensitivity and respect that their cases deserve. Lastly, change must involve the justice system. The court system must speed up the judicial process of sexual violence cases with the support of the legislative branch to create laws that crackdown and reform first-time offenders.

The system itself is flawed. The Department of Education and the federal government have constantly threatened to take away Title IX funding if universities cannot handle sexual grievances themselves. Most colleges conduct their own trials when sexual violence cases occur. When this happens, cases are often presided by professors and administrators rather than a jury and judge. This can result in unjust trials and lenient punishments for the perpetrators. Law enforcement’s history of low arrest and conviction rates, lack of confidentiality and respect, and victim shaming contributes to the only five percent of college women who report their sexual assault to the police.

The best way to address campus rape can be broken up into three solutions:

During the Obama administration, the White House launched the “It’s On Us” campaign. The campaign was created specifically to highlight and end campus sexual violence. It was supported by national sports franchises and well-known celebrities. The creation of such campaigns showed the administration’s solidarity with survivors of sexual assault. It also helped inform the public about the issue of rape culture throughout the country.

Rape Culture and mass sexual assaults are not simple issues with simple solutions. Both sides are equally complex and difficult to decipher, but a solution can be attained. To solve the rape culture that plagues the nation, we must become educated on what sexual assault truly is and who it impacts. Another step the country must take is to stop our culture of victim shaming. Victim shaming is what directly feeds rape culture; the idea that the person attacked did something to justify a person assulting them is violent and harmful. The media’s portrayal of women as sex objects for men also helps feed rape culture. Popular media that depicts women as nothing but objects for men to control is the cause of the issue. Rape culture is an epidemic that endangers the public. Congress must do something to protect the survivors of sexual assault. It must pass legislation that accurately expresses the severity of sexual assault and its heinous repercussions to not only the survivor but the community as well. The punishment for sexual assault should have similar consequences as crimes that violate the social contract of a civilization.