The Psychological Impact of the Climate Crisis

This week across the nation and the world, powerful climate activism has taken place. Young activists have been able to coordinate a global climate strike week in 150 countries that began Friday, September 20th with protests around the world.

Currently, in New York, different nations of the world are convening at the United Nations Climate Action Summit to discuss global initiatives to combat rising sea levels, increasing average global temperatures, increasing global greenhouse gas emissions, and the economic costs that come with powerful natural disasters and climate change. The climate crisis as stated by U.N. Secretary-General António Guterres this morning, “is moving faster than we are.” 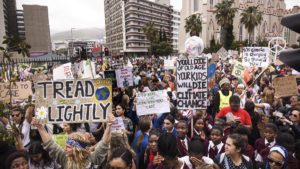 The climate crisis is a direct threat to our existence and threatens to dictate our future with catastrophic effects. Scientific findings of rising sea levels, air pollution, toxic waste, famine, and water scarcity have been predicted to cause massive human migrations. The climate crisis will lead nations into war over resources and territory. Based on the course we are on, this is the reality of our future.

We are currently feeling the early effects of climate change. This past week my hometown of Houston, Texas was brutally hit with 40 inches of rain by tropical depression Imelda. Flooding homes, cars, highways, schools, and businesses that had just recovered from the devastation caused by Hurricane Harvey back in 2017. The stark reality of the climate crisis is affecting us in many ways, more than just physical. It also poses a threat to our mental health and well-being. The climate crisis is having a dangerously heavy psychological impact on people. A 2016 federal report conducted by the U.S. Global Change Research Program research found that “people’s anxiety and distress about the implications of climate change are undermining mental health and well-being…” 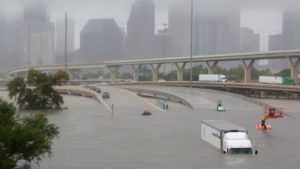 This is a sentiment that I’m personally struggling with as well as thousands of others that are currently feeling the effects of a violent climate. Undergoing another powerful storm and experiencing the terror of flash flooding brought back debilitating anxiety and an overall feeling of hopelessness that I first truly experienced back in 2017 during hurricane Harvey. However, this climate-induced anxiety and awareness began as a child. Films like The Day after Tomorrow, Fern Gully, and Wall-E were my own personal horror movies. Although they were tales of science fiction and a result of exaggerated Hollywood screenplays, they were my first encounter with the issue of climate change. What would happen if the pollution we created began melting the ice caps, destroying forests and wildlife? What would happen if we created so much waste and pollution that our world became inhabitable? The films shared a common ending- people would get sick, people would have to leave their homes, and most importantly people would die.

As a young child back in 2008 my fears could be lulled by the fact that the presence of climate change wasn’t a direct threat looming over me. The effects hadn’t yet taken place. I could console myself with the thought that although those films had realistic themes of climate destruction and human extinction the effects wouldn’t occur within my lifetime. Unfortunately, this is not the case for millions of young folks around the world. Research has found that “young children and adolescents tend to experience more severe mental health impacts and take longer to recover…” The effects of the climate crisis are flooding their schools, causing their families to flee from their homes to avoid extreme natural disasters. The issue is also constantly discussed in the news, making it difficult for a young person to avoid or process.

The psychological effects of the climate crisis are especially apparent in low-income communities where the physical effects are devastating their homes and displacing people. The economic costs that come from rebuilding after a natural disaster and the loss that comes from it takes a serious toll on people’s stress and anxiety levels. Most of these communities already suffer from high stress and anxiety due to the financial strain of living paycheck to paycheck. People in these communities are also at a higher risk for mental illness and undiagnosed mental illness because many are uninsured and unable to seek out mental health facilities because of finances. The report found that those who are economically disadvantaged and those that are experiencing homelessness are, “at higher risk for mental health consequences from weather-related disasters.”

The psychological effects that come along with climate change is an aspect many climate activists and researchers often ignore or overlook. The mental health impact is damaging the most vulnerable of society: children and those that are already marginalized and at risk. The climate crisis is causing children and young folks across the globe to seriously question “what is the point of it all?” What is the point of going to school? Getting married? Having children? If the foreseeable doom is amidst. Its stopping young folks from chasing their dreams and living their lives fully and authentically. Instead, they have to fight for their right to live in an inhabitable world.

The right to live is the most basic fundamental human right. It is a right that all humans and living beings deserve. There is no other option. The reality of our situation is extremely difficult to live with. We either organize, change the capitalistic system that enables the destruction of the planet or we do nothing and perish.

Although it is unfair and reality is bleak, these are the conditions that were handed down to us and it is time for our generation to right the wrongs. We are the most powerful, educated, and connected generation to ever exist. We can fix our world and here is how we do it. The global climate strike movement has created a website that not only informs users on their goals and objective in various languages, but it interactively allows people to find climate strikes, organizations, local campaigns, resources, news. The site also allows people to start their own local climate strike and put the event on their map. It is a powerful, educational and connective tool that allows young folks around the world to have agency over their future together. 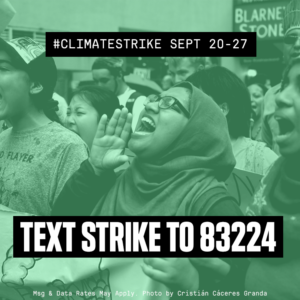 As young folks, we have heard and seen the mistakes of the older generations. We have heard their ridicules and seen their efforts to deter our movement, but we will not go gently into that good night. We will rage, rage against the dying of the light. And we will win.