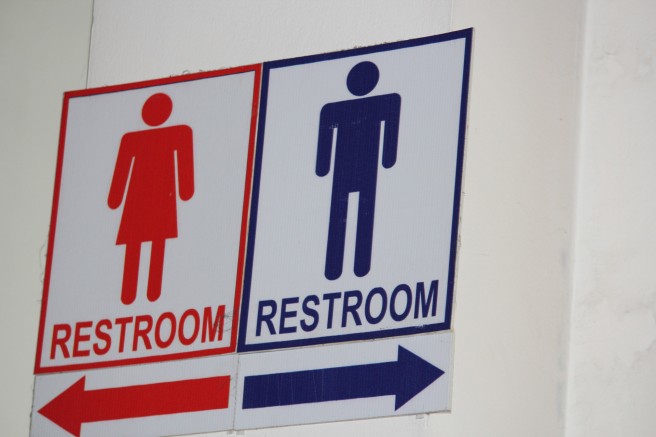 As of February 22, the Trump administration rolled back federal protections for transgender students implemented during the Obama-era. In May 2016, the department of Education and Justice issued joint guidance to let trans students access restrooms and other gender-segregated facilities in accordance with their gender identity. This meant not only that public schools could not require students to use facilities inconsistent with their identity, but that separate, individual-user facilities were also not appropriate accommodations. While not embedded into law, schools failing to abide by the Obama administration’s interpretation of the law risked lawsuit or loosing federal aid. This guidance was based on the Obama administration’s interpretation of Title IX – that federal law banning sex discrimination in schools also applied to gender identity. Trump decision to rescind of these protections effectively put the (non) issue of bathrooms back into the hands of individual states.

The Trump administration purportedly rolled back these protections in order to “further and more completely consider the legal issues involved.” Without providing any specific directions for schools, the “Dear Colleague” letter provided that “schools must ensure that all students, including LGBT students, are able to learn and thrive in a safe environment.” This fails to recognize, or conveniently disregards the reality that denying access to facilities is incompatible with this command.

Trump’s reversal of protections goes beyond the realm of bathrooms. As Laverne Cox stated on MSNBC, these laws are about much more than bathrooms; it is a fundamental attack on our right to exist in public space. As a nonbinary trans person who doesn’t feel particularly safe or comfortable using either restroom, leaving my college campus is certainly a voyage complicated by bathrooms. On campus, I have the option of using gender neutral restrooms which, although not abundant, are essential to my ability to exist here. If I’m really in a bind and don’t have access to gender neutral restrooms or am too inconvenienced to use my personal genderless restroom, I will occasionally use the men’s restroom. At the very most, I may feel some discomfort while curious men crane their necks, following me to the stalls to decode my gender and figure out if I belong, but I never feel a serious threat to my safety. In fact, I often am amused at their failed attempt to try to understand in 15 seconds what I still haven’t managed to figure out in my nineteen years of living. Honestly, most of my semi-comfort with using men’s restrooms is because I use them during class when they’re not in use.

Any nonchalance I have about using the restroom completely dissolves when I leave campus, not because Pitzer is some post-oppressive utopia, but because beyond these walls, the false sense of safety I have passively grown into does not translate.

Any time I plan to leave campus, I routinely use the restroom up until the very moment I leave and curtail how much water I drink while I’m out. There’s truly nothing like being out in the hot California sun and reaching for water, only to remind myself that staying hydrated will end with needing to use the restroom. It also complicates going out with friends. Refills at restaurants have to be regulated, and my cut off time for being out is basically when I can no longer hold off the need to go. Restrooms, something that most people don’t even think about is a constant fear of mine – sometimes when I’m on campus, always when off. It is so incredibly dehumanizing to have to plan my entire life around when I’ll have to use the restroom. The politicization of bathrooms has made it so that my choices are either to stay hydrated, get a UTI , or potentially face violence when entering restrooms. This bathroom bind that trans people are put in effectively communicates to us that our occupancy of space is contingent on the perceived fears of violence circulated by conservative fear mongers. This is transphobia codified into law.

Within the last few weeks, there has already been a flurry of legislative activity, riding the coattails of Trump rescinding protections. According to the National Conference of State Legislature, legislators in 11 states have bathroom bills under consideration in the 2017 legislative session. Most of these bills are far more insidious than North Carolina’s HB2, introduced into law last March. HB2 conditions entrance to a multi-occupancy single-sex public restroom based on sex “stated on a person’s birth certificate” whereas Texas’ SB6 conditions entry based on the sex listed on one’s “original birth certificate.” Virginia’s failed HB1612 used similar language in their bill. A failed bathroom bill, HB2171 was also introduced by state Rep. John Whitmer of Kansas who wanted to limit entry based on chromosomes. Whether these bills pass or not, we are witnessing a growing determination by legislatures to cover all loop holes that can potentially allow trans people to continue using the correct restroom. We are quite literally being expunged from public space.

Having government issued identification and documentation amended can often be an affirming and life-saving aspect of transition, but the emphasis on original birth certificates delegitimizes the stress, inconvenience and financial resources that go into modifying these documents. It also means that a trans person could quite literally be the “appropriate” and “passable” trans person and still wouldn’t be permitted to use the restroom in accordance with their gender. For states like North Carolina, where an amended birth certificate permits entry into gender-segregated facilities, amending birth certificates usually requires having gender affirming surgeries which are costly, painful, result in sterility, and simply aren’t a need for all trans people. Furthermore, in Tennessee, Ohio, Kansas and Idaho birth certificates cannot be amended at all. Even for the other states that do amend birth certificates, the process can be timely, costly, and simply inconvenient. Considering that trans people are nearly four times more likely to have a household income below $10,000, jumping through all of these financial and medical hoops just to be able to legally use the restroom is insidious. For trans people of color, income levels are even lower, and this demographic is nearly six times as likely to live in poverty.

Some hoped that the upcoming Supreme Court case brought by Gavin Grimm against his Virginia School board might create nationwide standards in favor of trans students being able to use the bathroom of their choice. Yesterday’s decision by the Supreme Court to punt the case back to the lower court creates a significant hurdle for this goal, especially in light of the new directives from the Trump administration.

Gavin Grimm may be the face of bathroom bills as it currently stands, but make no mistake, these bills will have disparate impacts on the most marginal of our community. We have to put these anti-trans bathrooms bills in context and have a more nuanced analysis. We have to put this in conversation with the new detention facility opening in Texas that has a specific unit for trans people, with the 47% Of Black trans women who are incarcerated, with the seven recorded murders of trans women of color in 2017 alone. As Lt. Gov. Dan Patrick of Texas explained in an interview with the Houston chronicle, SB6 only expels trans women from women’s restrooms and not trans men from men’s restrooms because “men can defend themselves.” As a whole, the trans community is certainly being targeted, but trans women and femmes, specifically those of color will bare the brunt of this legislation and the violence it incites in constituents who see a nod to transmisogyny as a validation for violence. These anti-trans bathroom bills may spur fear in all of us, but we must be honest about who they impact. It’s trans women, trans femmes, folks whose biggest aspiration isn’t to be read as cisgender, who are visibly trans and like it that way, who don’t have the resources to assuage cis fears and wouldn’t have it any other way even if they could. Trans people are under attack – by the state, by our families and our own communities. As Isa Noyola stated at the 2017 Asterisk Trans Conference, the time for allyship was ten years ago. Now we need resources, we need buffers between trans bodies and the state and to stop being complacent in transmisogyny.