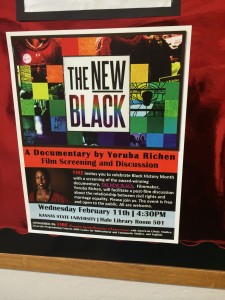 Last month the Kansas State University chapter, FIRE, hosted a screening of “The New Black” in honor of Black history month.  The film discusses homosexuality in the black community and the influence of Christianity.  After the screening there was a panel that was led by the filmmaker, Yoruba Richen. The panel discussed the relationship between civil rights and marriage equality.  The event was co-sponsored with American Ethics Studies, Diversity Programming Council, DOW Center for Multicultural and Community Studies, and the English Department with over 200 students, faculty and staff in attendance.