UGA has something to Say! 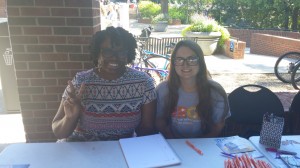 Athens, Ga. – URGE chapter members  at the University of Georgia partnered with  the Feminist Women’s Health Center to raise awareness about reproductive justice in Georgia. The chapter members were  adamant about students knowing about Georgia state officials recent decision to cut off funds for Planned Parenthood  STI kits. These kits were the source for testing for STI’s such as chlamydia and gonorrhea. The event lasted approximately 2 hours and chapter members engaged students by signing them up for local, state and national conferences with URGE.  Chapter members were also able to pass out informational cards and make  a connection with their student body. UGA’s event made a BOLD statement and garnered major support.