UTEP uses Nail Art to Fundraise for the West Fund 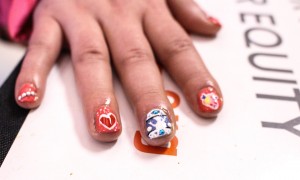 The URGE chapter at the University of Texas El Paso held a nail art fundraiser in support of the West Fund. Complete with a glittery uterus, UTEP raised over $400 in a a few hours. The funds will be used to support abortion care in the Southwest region of Texas. The chapter also received some attention in their campus newspaper, with quotes from campus leader, Gina Lawrence.