In four states, our students from over 20 universities advocated in support of and against bills directly related to their reproductive freedom, and the freedom of others. Over the last month, they dedicated themselves to using their most powerful assets as a voting class: their voice and their presence at state capitols.

In Alabama, students advocated to overturn a legal mandate that currently prohibits discussion of LGBTQ relationships in a positive way in the classroom, and requires teachers to stigmatize and shame their students. They worked side by side with community supporters from Alabama Alliance for Healthy Youth to ask legislators to repeal the mandate and allow for more inclusive and comprehensive sex education in Alabama’s schools. 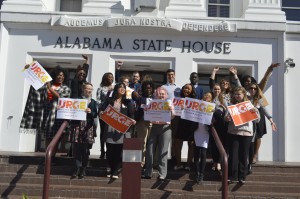 Georgia student advocates  took to their state capitol to rally against the use of religion to restrict the rights of others. Because the state currently lacks strong anti-discrimination protections for LGBTQ people, the creation of bills that allow individuals and businesses  to opt out of complying with the laws that do exist, using religion as an excuse, would harmful. They would prevent people from accessing the employment, healthcare, and education that they need and deserve. 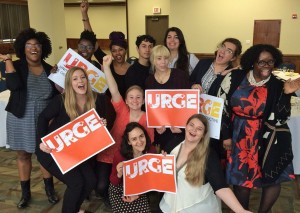 In Kansas, 60 university students, Planned Parenthood advocates, and Trust Women supporters converged on the State Capitol in Topeka, KS to ask legislators to protect reproductive health for thousands of Kansans by voting for a repeal on the telemedicine abortion ban. The student advocates also spoke against attempts to defund Planned Parenthood. 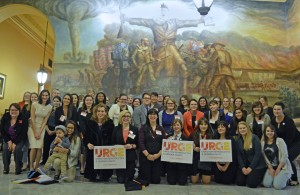 Ohio saw its largest group of advocates, with over 70 students in attendance and 12 state universities represented. Rallying in support of a bill that would increase protections for reproductive health clinics in the state, students told legislators that adding penalties for clinic violence and harassment, and looking after the safety of clinic escorts and doctors was important to them as constituents.

Want to know exactly what an advocacy day in Ohio looks like? Check out the video, “Activism is my aesthetic” made by one of student chapter members, Morgan Gale from Bowling Green State University.

Congratulations to the URGE staff, the chapter leaders, and student participants who were a part of our largest advocacy days to date. 150 students made a difference in their states, and will take the power they gained from lobbying to the polls and beyond.