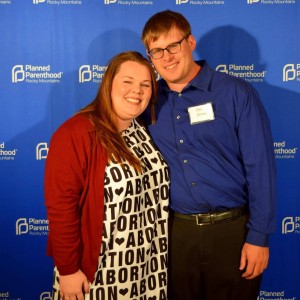 How were you involved with URGE?
I was the President of our chapter at WSU from Fall 2012 through Spring 2014. At the time, the national group was called Choice USA, and I had the opportunity to affiliate our campus group called Feminists on Campus Uniting Students (FOCUS) with Choice USA. It was an incredibly important step for our group, and the support that we received from the national organization allowed us to expand our presence on campus significantly.

What do you do now, and how do you bring a reproductive justice framework to the work you do?
Reproductive justice is everything that I do. I am currently a Traveling Health Center Assistant with Planned Parenthood of the Rocky Mountains. As a Traveling HCA, I provide support and health care to 29 Planned Parenthood locations that span 4 states: CO, NM, NV, and WY. Many of the communities across the region I travel to rely on PPRM for access to reproductive health care that they would not have otherwise. I’ve always been focused more on direct service than anything else, and I know that I help to provide a tangible impact for not only our patients, but communities as well.

Before I had the opportunity to move into my current position, I was fortunate enough to be able to take my passion for reproductive justice and build it into a career working for several other fantastic organizations. The first organization I was involved with was the Wichita Area Sexual Assault Center, where I started as a volunteer and became a crisis counselor for survivors. After that, I began as an intern with Trust Women, and helped them to open the South Wind Women’s Center (SWWC) in 2013 in Wichita, KS, where I became the Patient and Funding Coordinator. For those who may not be familiar, that is the same building where Dr. Tiller practiced prior to his murder in 2009. It was an incredible experience to be part of a group expanding access to a community in dire need of reproductive health care and abortion care. My experiences at SWWC ignited my passion for serving the community, and solidified my desire to continue work in abortion care.

What skills or knowledge did you learn from URGE that you use in your current work/life?
There have been so many ways that my time with URGE has affected my life and career. For one, without the exposure to the reproductive justice movement that URGE opened me up to, I would have never had the passion for serving the community in the way that I do. That connection I built with student leaders from chapters across the country inspired me to get more involved with local organizations, which led me to the opportunities I have had to pursue a career in reproductive health.

I certainly gained experience and confidence from my time as a student leader of our URGE group. Many of our activities were focused on providing comprehensive sexual health education, as many of our fellow students did not have access to that information through high schools in Kansas. That outreach and education work is important, and my background with that work helped me to better serve patients at Planned Parenthood, since education is a critical part of our services.

As a student leader, it was important to be bold, to be resilient in the face of opposition. Those qualities I learned have been incredibly valuable to my time working in abortion clinics, sometimes in very hostile communities. Not only was that important for my experience helping to open a clinic in Wichita where one had been closed for years due to violence, but also to supporting our incredible staff at Planned Parenthood clinics like the one in Colorado Springs, which has also been a target in recent years. Anti-choice extremists are relentless, so we must be relentless as well in caring for our patients.

What are your top priorities in politics and/or reproductive justice?
The personal is political. My job is political in nature. Though I’m not as involved directly in politics as my partner, my job is regularly impacted by politicians and laws. That said, my main priority in our movement is expanding access to needed health services. So many people don’t have access to abortion care or even basic health services, and I really believe a major focus of many organizations like Planned Parenthood is rightly to protect care where we already provide it, and expand care when we are able.

Many people think about the laws of a state when they consider how difficult it is to access reproductive health services, including abortion. And to be honest, our representatives in Colorado have been more supportive than in some other areas of the country. But that can change quickly, as I saw in Kansas when anti-choice politicians gained complete control of the state government. Unfortunately, that is happening now to our government at the national level. I’m very concerned about the repeal of the Affordable Care Act, not only for our patients that rely on Medicaid, but for the damage the current bill seeks to do to Planned Parenthood itself.

Who inspires you?
I feel like it’s a cliché to say my mom is my inspiration, but for me it’s the absolute truth. My mom raised two teenage daughters as a single parent, and has never been afraid to work hard and exceed the expectations others had for her. Her story is an interesting one, she was a race car driver, as well as the first woman to graduate from an elite mechanic training program, and regularly faced sexism and discrimination in that field. She taught me and my sister that we are not limited by what society determines that our roles should be. She has always supported us, and has raised two bad-ass feminists to be as tenacious as she is.

How were you involved with URGE?
During my time as a student, I was involved with the WSU URGE chapter as treasurer and vice president. I was also a Student Journalist for URGE from 2014-2015, writing for the ChoiceWords blog.

What do you do now and how do you bring a reproductive justice frame to the work you do?
Since graduating in May 2016, I’ve been involved in political campaigns. I worked during the 2016 election in Colorado for Hillary Clinton, Michael Bennet and Morgan Carroll. I am currently working on Jared Polis’s campaign for Governor of Colorado.

I believe that there are many ways to be involved in the movement for reproductive justice, and one of those ways is supporting candidates for office that will protect our rights and advocate on our behalf for better policies. Organizing for political candidates can also be a great way to be involved for anyone looking to help amplify and uplift voices of people who are traditionally underrepresented.

In my current position, I am working to for the candidate I believe will be the strongest advocate for many issues I care about, including reproductive rights, paid family leave, a higher minimum wage, LGBTQ+ rights, environmental sustainability, racial justice, affordable housing, and more. All of these issues are reproductive justice issues, and we need candidates for office that are willing to advocate for all of them. Also, we will make history by electing Jared Polis as Governor, since he will be the first openly gay man to be elected Governor of any state. Representation is about more than what issues a person supports, and I am glad to be pushing for more inclusive representation in this state.
What skills or knowledge did you learn from URGE that you use in your current work/life?
I learned a lot from my involvement with URGE. I believe some of the things I learned that have been the most important for my work in political organizing have been what URGE taught me about listening, becoming comfortable with being uncomfortable, and how to discuss political topics in an inclusive way.

During my time with URGE, I had the opportunity to attend several conferences, and I always left with a better understanding of the power of positive, affirming conversations. The stories of all of the other attendees, the different backgrounds and life experiences showed me how many different ways in which reproductive justice affects our lives. The trainings and discussions were integral to understanding how all of these issues fit together.

One particular training I remember being incredibly helpful to me in my career as an organizer and advocate was a discussion of values-based messaging. It taught me how to avoid the pitfalls of discussing many issues but abortion care especially, and how to frame our perspective in a way that affirms values rather than assuming an adversarial stance. Often times, a major problem with well-meaning politicians, organizers, and advocates is assuming that the people we are talking to already know why our values shape our opinion on an issue. Being able to articulate that can be the difference between a productive conversation and one where both people leave feeling frustrated.

Ultimately, we know all of these issues are tied together. And that’s why I believe that it’s important that we support candidates who will support us on these issues, so that we as a society can continue to move toward the direction of justice.

Who inspires you?
That’s a challenging question, since I know there have been so many people who have influenced and inspired me throughout my journey to this point. But if I had to narrow it down to one person, I think that person would have to be Elise Higgins from Planned Parenthood of the Great Plains. Fun fact: she’s also a board member of URGE!  I had the opportunity to work with her throughout my time in advocacy organizations and campaigns in Kansas, and the reason I would have to pick her as my inspiration is that she is a model for what politics could be. While she has been working on behalf of so many people connected with Planned Parenthood in the Kansas State Legislature, she has been far too often in a hostile environment for so many things we all at URGE care about. But, despite that environment, despite being in a situation where we and our supporters can feel overwhelmed or powerless, she maintained consistent optimism, hopefulness, and love for the people she was advocating for. When I interact with people in our current national political environment, I encounter people that feel powerless, that feel like there is no hope. And that can be a challenging starting point to build from. But, I try to remember the optimism and the can-do attitude put on display for us by folks like Elise, and I feel more hopeful myself. No one person can do it alone, and we won’t make the progress we want to make overnight, but with people like that on our team, I think we’re in good hands.