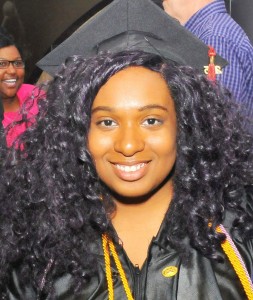 How were you involved with URGE?

I was the chapter leader for URGE while I attended Kansas State University. Upon graduation, I was the conference assistant for the National Membership conference in 2015 and acted as an URGE representative for the All Above All Advocacy Day to gain legislative support for the Each Woman Act.

What do you do now and how have you brought a reproductive justice frame to the work you do?

I currently do technical support for the Centers for Disease Control and Prevention. This role is pretty basic and I am mostly removed from the actual organization outside of things that involve technical troubleshooting. However I stay informed regarding issues that the CDC handles and my lens is always filtered through a reproductive justice framework.

What skills or knowledge did you learn from URGE that you use in your current work/life?

I have become involved with other reproductive justice organizations now that I live in Atlanta, GA. The Feminist Health Center is literally around the corner from my office building. I have joined an organization called Women on the Rise; they focus on resources and empowerment of women in the community who have been formerly incarcerated. I also am working with Occupy Our Homes Atlanta which is an organization fighting gentrification here in the city. Many of the members are mothers who have been affected by these issues as well as young people. Working with URGE really helped me grasp how issues of RJ intersect in various aspects of the community.

What are your top priorities in politics and/or reproductive justice?

I have been working as a campaign volunteer for a Park Cannon, who is running for a house seat here in Atlanta. She is queer, a woman of color, and only twenty-four years old! She also worked for the Feminist Health Center and is dedicated to issues of reproductive justice. I think that politics definitely play a huge role when we are able to get people involved. I personally believe it’s imperative that people are engaged in the political process at state and municipal levels. One of my top priorities is definitely working in civic engagement and making sure people are educated about issues that affect their communities. For me, this also includes making sure people are educated about laws and their rights. I am doing a lot of personal reading and I’m attending events, meetings and workshops on these topics since Atlanta is a new community for me and I have a lot to learn about it.

I could write a five-page answer to that question! There are so many it’s hard to choose one. Park Cannon; the incredible young, queer folks I have met at various organizations since I moved here; my aunt who works two jobs and is in the process of obtaining her master’s degree. She graciously opened her home and allowed me to gain some footing before diving head first into adulting :-); the people fighting for their rights to live in their homes; and students I have met while working against racial injustice on their college/university campuses and the list could continue to infinity.

I can’t answer this question, however, without mentioning State Representative Stacey Abrams. She is the House Minority Leader for the Georgia General Assembly and State Representative for the 89th House District. She’s also the first woman to lead either party in the Georgia General Assembly and the first African-American to lead in the House of Representatives. She has co-founded/runs several businesses. She is a champion for reproductive justice and she writes romance novels in all her spare time! You can read more about her here: http://staceyabrams.com/about/bio/.

I actually will be working with one of her organizations, getting youth registered to vote and possibly on a few other projects. I mentioned all of these facets because I draw my inspiration from many people who are engaged in justice work in various settings and positions. I think sometimes it can be easy to get caught up in the ideas that in order be an activist or put in the work for reproductive justice you have to be out on the front lines, protesting or being physically visible in some way. While that piece is extremely important and necessary, the nuances of this work are much more robust than that alone. Never think that your seemingly small actions aren’t making a difference or inspiring someone else. They are.