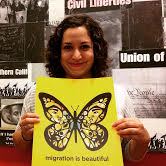 How were you involved with URGE?
I was first hired at URGE (then Choice USA) as a summer Field intern in 2011 right after graduation. I had been involved as a student and saw URGE was hiring a paid internship and knew that it was my destiny to become a professional feminist. The internship led to a full-time position as a Field Associate and then as a Field Coordinator. I left at the end of 2015.

What do you do now and how do you bring a reproductive justice frame to the work you do?

As an Organizer for the ACLU of Northern California I am constantly bringing a reproductive justice framework into my current work in the Immigrants’ Rights movement. We are in a crucial moment in history. American Muslims, immigrants and U.S.-born alike, are part of the fabric of this nation and part of what makes America the country it is today. Anti-Immigrant policies separate American families and deprive our country of the contributions that these newcomers, and their children and grandchildren, will make as Americans. We’ve also been seeing a lot of cases where immigrants are treated unfairly and denied access to the healthcare, representation, and/or direct services they want and need. When an individual who has been a part of the community for a long period and is then suddenly faced with being detained and deported, it affects their entire family and community at large. That is why immigrants rights are reproductive rights.

What skills or knowledge did you learn from URGE that you use in your current work/life?
With skills and analysis I gained from URGE, I co-founded an abortion fund called the West Fund. The West Fund is a 501(c)(3) non-profit organization affiliated with the National Network of Abortion Funds and based in El Paso, Texas, that works to make abortions accessible for all people. We are a small group of volunteers who believe reproductive justice is only possible when all people have the information, ability, and resources to make their own healthcare decisions. I currently serve on our working board as the Development Director. Over the 2 year that we have been funding patients, we have been able to fund over 200 patients with procedures that, on average, cost $1200. We recently received our first grant and continue to grow.

What are your top priorities in politics and/or reproductive justice?
My top priorities in the reproductive justice movement is to overturn the Hyde Amendment alongside partners within the All* Above All campaign. It is imperative that we continue to work as a movement to fight laws like the Hyde Amendment that explicitly target low-income, communities of color.

Who inspires you?
There are a lot of people who inspire me but someone I am continuously inspired by is Favianna Rodriguez, a transnational artist and cultural organizer who is currently based in Oakland. Her art illustrates various intersections from reproductive justice and immigrants’ rights to food justice and racial justice. Her art speaks directly to my soul—I think I own at least 6 prints by her, haha. Plus, she’s a queer Latina like me trying to make it by doing what we love in this movement.