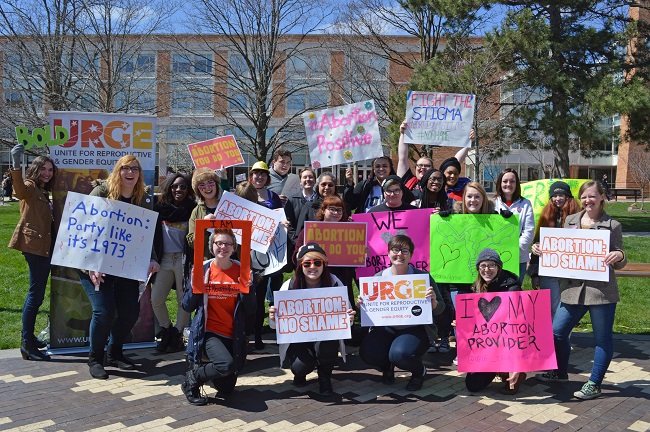 5 states, 10 campuses, 85 student volunteers, 400 texts to support the EACH Woman Act, 2300 petition signatures in support of abortion coverage… and one giant vagina costume.

The first ever National #AbortionPositive tour with All* Above All was an absolute success! Because we know better than anyone how hard being #AbortionPositive in red states can be, we’re thrilled with the impact the tour made in one month around the country. Based loosely on the model of the 2014 All* Above All Be Bold Road Trip, the tour spread the message that people who choose to get an abortion should never feel ashamed for making a personal healthcare decision that’s best for themselves and their families. Being Abortion Positive means believing that abortion is a public good and should be affordable and accessible to whomever may find themselves in need of one. Your zip code, insurance provider, or income should have no bearing on whether you are allowed to access the healthcare resources you need. On the tour, dozens of speakers attested to this fact and supported the EACH Woman Act, which would end the Hyde Amendment’s 40-year anti-abortion reign. Check out some of our favorite moments from the tour! 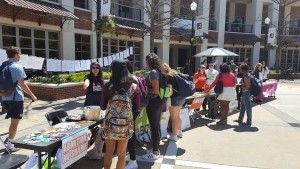 The #AbortionPositive tour visited Alabama first, stopping at the University of Alabama at Huntsville and the University of Alabama at Tuscaloosa. Dr. Willie Parker, one of the most vocal abortion providers in the South (catch him in the documentary on TRAP laws, Trapped), made an appearance at the Tuscaloosa campus rally, infusing the tour with his own powerful storytelling of the patients who routinely seek his services and guidance at the only abortion clinic left in the entire state of Alabama. 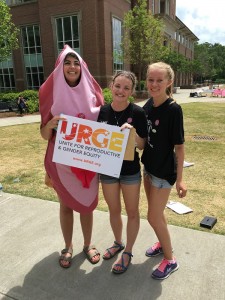 The second southern state the tour visited, was Georgia. At Georgia Southern University the tone and atmosphere was infectious as two student volunteers spent the entire tour dancing with #AbortionPositive signs. One student adviser in the Women’s Studies Department sang the tour’s praises, saying that she had never seen an organization put so much into its students. Not to be outdone, the University of Georgia students ended the southern leg of the tour with a bang, purchasing and wearing a vagina costume around their campus. Regina the Vagina and the students at UGA scored over 500 EACH Woman signatures, and encourage more than 30 students to sign up to join the UGA chapter! 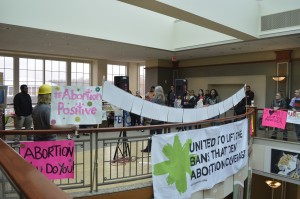 Bowling Green State University and Ohio University hosted the #AbortionPositive tour. Our OU chapter, FEM, proved why they were selected as this year’s Outstanding Chapter Award. With the ominous threat of rain, FEM hustled to secure and decorate a new tour space, while keeping the fun and playful atmosphere in tact, even indoors. 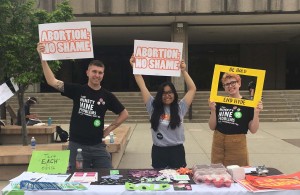 At Kansas State University and the University of Kansas, students also kept up the energy, hosting speakers from local abortion funds and Planned Parenthood for Kansas and Mid-Missouri, even as anti-abortion activists tried to disrupt the event.  Student volunteers gathered a combined 450 petition signatures in support of the EACH Woman Act. 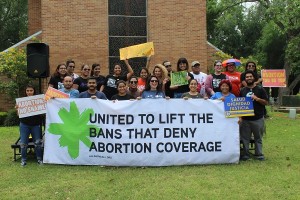 We couldn’t have ended the #AbortionPositive tour anywhere but Texas! With University of Texas El Paso and University of Rio Grande Valley closely affected by HB2, the rallies on those campuses impacted more than just the students. The National Latina Institute for Reproductive Health came out in full support of the #AbortionPositive message, as well, garnering attention the El Paso’s local Spanish-language newspaper.

See all of the picture of the tour on facebook.