The Power of the Vote: How We’re Making Sure Young People are Heard on Election Day

During this election season, we’re engaging with cities in Alabama, Texas, and Ohio to ensure voter registration numbers among young people are the highest they’ve ever been and to get out the vote, ensuring youth voices are heard at the polls.  Take a look at the teams, successes, and future goals for the canvassing teams in: Tuscaloosa, AL; Birmingham, AL; Denton, TX Houston, TX; Bowling Green, OH; and Toledo, OH. 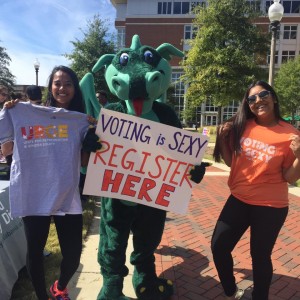 Our southern canvassers have knocked on 5,033 doors to educate people in Tuscaloosa and Birmingham about the dire need for comprehensive sex education in public schools. Every year, the lack of evidence-based, medically-accurate and LGBTQ-inclusive hurts students and their ability to have healthy relationships–with themselves and others. Our canvassing team identified over 80 people who wanted to get involved with URGE at the local and  585 people as pledge supporters for comprehensive sex education. Before the end of the voter registration period in the state, URGE canvassers helped 227 people register to vote.

Our voter engagement team in Denton and Houston are covering so much ground and changing the way voters in their hometowns look. In Denton alone, 78% of the county’s voting age populations is officially registered to vote–an unprecedented number that shows the power our teams have built. When the voter registration’s office recognizes your URGE-branded voter information, and credits you with increasing the voter registration turnout, you know you’re the shit. The canvassing team knocked on 1800 doors and identified almost 100 people who would be interested in working with URGE. They’ve also received 208 pledges to vote in support of abortion access and registered 130 people to vote. 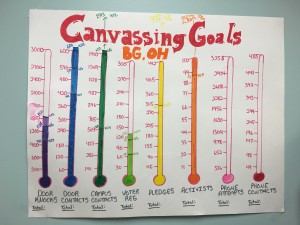 The canvassing teams in Toledo and Bowling Green have spent this fall season covering an amazing amount of ground. Reaching and surpassing their goals for voter registration, they have knocked on 4,272 doors, made 1,304 phone calls, and received 2,834 pledges–all in the name of increased abortion access. On campus, they made contact with 3,032 students, surpassing their goals at Bowling Green State and University of Toledo. They’ve hosted Sex Trivia Nights that saw turnout as high as 80, and spent the summer tabling at music festivals across the state. Their success is proving that there are more constituents than many realize who are excited and supportive of abortion access for all–no matter one’s zip code. Before the state’s registration deadline, Ohio canvassers helped 342 people register to vote.


So, what are our teams up to now? Getting out the vote! Their next steps will include phone banking, calling and acknowledging the thousands of people they identified in the last few months.