3 Reasons Why Voting Rights are a Reproductive Justice Issue

In 1965, President Lyndon B. Johnson signed the Voting Rights Act into law. The Voting Rights Act (VRA) was enacted in order to prohibit election regulations that would prohibit anyone from voting due to their race. A very important part of the act required jurisdictions with a history of discrimination in voting to get federal approval for any changes in their electoral laws and regulations before they can take effect.

In 2013, the Supreme Court of the United States gutted the VRA by removing the requirement that applied to jurisdictions with a history of discrimination. In 2014, a bipartisan group of legislators introduced legislation to help strengthen the VRA. This legislation is incredibly important especially as we see voter disenfranchisement laws increasing. By restricting the right to vote – from requiring ID at the polls, to ending early voting, to redistricting – we are seeing our communities being prohibited from electing officials who actually represent their interests.

In honor of the 50th anniversary of the VRA we have compiled the top three reasons why voting rights are a reproductive justice issue. It’s important to recognize this connection, because to ignore it has dire consequences. For example, in 2011 Mississippi voters were presented with two ballot initiatives. One was a so-called “personhood” amendment that would have resulted in outlawing abortion and could have threatened many types of birth control and in-vitro fertilization. They also had a voter ID ballot measure that would result in keeping many young people and people of color away from the polls. While many large pro-choice organizations flocked to the state to defeat the personhood bill, the voter ID provision was largely ignored. The personhood amendment failed, but the voter ID measure passed. There are now Mississippians that have retained the right to get an abortion, but have effectively lost their right to vote.

Reason #1: Voter suppression disenfranchises the same people who are most affected by anti-choice laws 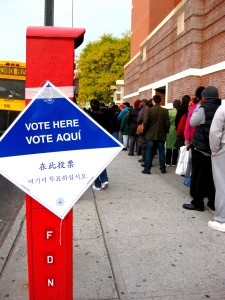 One of the most common forms of voter suppression laws is requiring an ID to be shown at the polls before voting. Proponents of these laws say that they are necessary to prevent voter fraud, but there are very few documented instances of in person voter fraud. Voter ID supporters often suggest that it is easy to get an ID and it shouldn’t be a barrier to someone’s ability to vote. We know that this is not true for many of our communities.

First, getting an ID can be extremely challenging for young people. Young people are less likely to have an ID to begin with, and may have problems getting the needed documents and finding the money and time to navigate the complex system. When voter ID laws are passed, voters aged 18-23 have the highest reduction of turnout of any age group. Trans folks also carry one of the heaviest burdens when it comes to voter ID laws. If a trans person has an ID with a gender marker that doesn’t match their gender identity or presentation, they may fear being turned away from the polls due to bias or misunderstanding the law.

Voter turnout by women of color has been growing and their impact in elections can be substantial if, but only if, they maintain the right to vote. We know that voter ID laws have been shown to fall heavily on people of color, and specifically black folks. If the trend of voter suppression laws continue it will make it harder for women of color to get to the polls. Redistricting will make it harder and harder to get to a convenient poll location, ending early voting will make it more challenging to balance work, childcare, and getting to the polls, requiring ID will continue to disenfranchise folks in order to combat a problem that doesn’t exist – voter fraud. Women of color are disproportionately affected by funding restrictions on abortion care and the many other restrictions, like waiting periods, on abortion care.

Continuing to prevent those who are most affected by reproductive healthcare restrictions from the polls makes it impossible for  them to vote on what is best for themselves and their families. 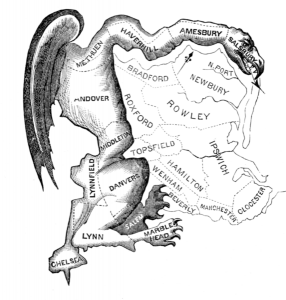 Gerrymandering is the process of redrawing the boundaries of a voting district in order to make sure certain demographics, usually white folks, have the most voting power and therefore elect officials who look like and represent only their values. Gerrymandering is another way to disenfranchise marginalized people and discount their votes. Take a look at this voting map of Ohio for a great and terrifying example of what this looks like.

Ohioans support the right to an abortion, but because of the redistricting that happened after the 2010 election, the state legislature is overwhelmingly anti-choice. After the 2012 election, anti-choice politicians hold 60 percent of the seats in the Ohio House, despite receiving only 49 percent of the votes. The results of this Gerrymandering has been catastrophic for abortion rights and access in Ohio. Since 2011, Ohio has passed 16 anti-choice laws, including banning abortion after 20 weeks of pregnancy and stripping Planned Parenthood of funding. During the same time period, the number of abortion providers in the state has dropped by half.

Reason # 3: Anti-choice politicians are getting ideas from voter suppression laws

The basis of so many laws passed by anti-choice politicians is to make abortion more expensive, inconvenient, and inaccessible in the hopes that people will not be able to get them at all. From waiting periods that require making multiple trips to the clinic to laws that result in clinics closing, the gameplan of anti-choice activists is to put abortion out of reach for so many. These are similar tactics used to restrict voting access, making voting so hard that many won’t be able to cast a vote at all.

Given these similar goals, it’s no surprise that they are now copying tactics. Earlier this year, Texas politicians passed a law that requires abortion providers to ask for “valid government record of identification” from every patient to prove that they are over 18 years-old. This law mirrors voter suppression laws that require government ID to vote and will almost certainly have a similar effect of blocking young people and people of color from accessing an abortion. This was will also effectively bar undocumented immigrants from obtaining a safe and legal abortion if they need one. In addition to the devastating effect for Texans, this law has set dangerous precedent that could spread to other states with anti-choice majorities in their state legislature.

On this important milestone for voting rights, it’s a time to recommit ourselves to the fight against voter suppression. We must protect this most sacred right for all. That means pledging to vote and to help others in our community to vote too. It also means that we must demand that Congress restores the Voting Rights Act to it’s full power once again. And we must fight each attempt to limit the right to vote with the same ferocity that we fight each attack on our right to an abortion.