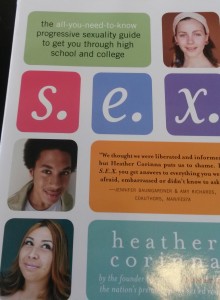 When I attended the URGE National Conference in Washington, D.C. this June, one of the things in the goodie bag was the book S.E.X. by Heather Corinna. Naturally, I thought it was appropriate to review it for a blog post.

On the cover, the book is described as “the all-you-need-to-know progressive sexuality guide to get you through high school and college.” This couldn’t be more accurate. The book is comprehensive, informative, and incredibly thorough, as well as an easy and quick read—I was able to breeze through it in a couple hours before I went through again and read it slowly to take notes.

As with just about any get-to-know-your-body book, S.E.X. has a chapter about the body and how it changes during puberty. Corinna does an excellent job at explaining the sexual organs, as well as giving helpful advice that young teens may not have heard before. For instance, she mentions that perfumed tampons are bad for the vagina and can lead to infections, something I didn’t learn until I was 17. She takes away any aspect of shame associated with puberty and the body, including an emphasis on the fact that it is normal to either have or not have intact foreskin.

The chapter on body image is an important read for people of all ages. Body image issues don’t stop once high school is over, and they affect all of us in different ways at different points in our lives. Corinna offers tips on how to battle and conquer self-image concerns that are useful to anyone, regardless of age.

The chapter on gender, sexual identity, and sexual orientation is one I particularly enjoyed. Early on, it is made crystal clear that gender and sex are not the same, a fact that everybody should know, and both terms are explained, along with the cultural assumptions associated with gender. Corrina gives a little bit of information about cultures in which gender isn’t seen as binary in the first place, something I didn’t know about until I took my first Women’s Studies course in college. She also defines gender dysphoria and explains the difference between transgender and transsexual, and gives suggestions for how to be more transfriendly.

There’s a how-to guide for coming out, and I think the best part is that she urges readers not to try to force friends out of the closet when they aren’t quite ready for it.

Once all the basics are covered, health—sexual and emotional—is a key aspect. The chapter on relationships has a long list of signs you are in an unhealthy relationship. After explaining the ins and outs of partnered sex, she makes it clear that “Nobody owes anyone sex.” Corinna also pops the myth about the hymen, and is very straightforward with how she feels about the concept of virginity: “You can’t “give” someone your genitals, and someone else can’t “give” your sexuality to you.”

Under the wide umbrella of health, there is a chapter on abuse and assault that is incredibly thorough on coping, though it needs to be mentioned that this chapter can potentially be very triggering, as it goes over every type of abuse/assault.

A long list of different methods of birth control is provided, but there is also a chapter on pregnancy and what the options are, just to make sure everything is covered. A comprehensive list of STIs is provided at the back of the book, with symptoms and treatments given so you know what to look for.

I wish I’d had the opportunity to read the chapter on sexual healthcare before I went for my first ever appointment with a gynecologist. I had no idea what to expect, and she tells you exactly what to expect.

As I’m sure you can tell, I thought this book was incredible. So why wouldn’t I give it a perfect 10 out of 10? There’s one reason, and one reason alone, and it lies on page 84. There’s a little grey box titled “GLBT…Q…A…I…WTF?” All of the different letters in the LGBTQIA acronym are defined, which would be wonderful. But the A is where she goes wrong. “A = Asexual (someone who doesn’t feel they are sexually or emotionally attracted to anyone at all) or ally (a heterosexual person who supports all orientations.)”

This is problematic. The A does not and will not stand for ally. Asexual people (and those who are somewhere under the umbrella of asexuality) already struggle enough for visibility and recognition. Giving allies the space they should take up is not fair in any way. Allies are just that: allies. They aren’t a part of the spectrum.

Other than that, the book was fantastic and I recommend it to any high school student, college student, or parent trying to figure out how to talk to their kid about sex. Actually, I recommend this book to everyone.