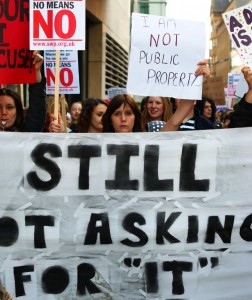 This past weekend model and artist Amber Rose hosted a SlutWalk in Los Angeles to speak out against slut shaming.

There are a few key lessons we can all take from it, especially as members of the reproductive justice movement.

But first, a brief history lesson.

SlutWalk was established in 2011 after a police officer at a school in Toronto told people they should not “dress like sluts” to avoid getting raped or other forms of sexual harassment.

This is problematic for many reasons, but here are two big ones:

1. Everyone has a right to their own body and their own choices.

Whether it’s their right to a safe abortion or contraception or simply what they want to wear. There is no reason society should ever police someone’s body and treat them as less than human because of what they chose to wear. If we as a society will ever start to really give people the right to choose an abortion, we first have to start with giving them the right to their own wardrobe.

One good thing to come out of this horrendous statement was, once again, activism from young people. SlutWalks are now movements around the country and are an open, safe space for people to dress how they want and express their sexuality. SlutWalks are giving young people the chance to take back the sidewalk and reclaim the word “slut” in an effort to raise awareness of and get rid of slut shaming.

Amber Rose did exactly that last weekend with a large gathering of activists dressed how they want who are still not asking for it.

As a reproductive justice activist, this is my open thank you to Rose and anyone else who has ever participated in a SlutWalk. Thank you for fighting for my right to my body.

Thank you Amber Rose, for being a great role model.