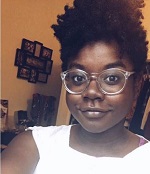 Major: Human Services with an Emphasis in Non-Profit Administration
Hometown: Kennesaw, Georgia
Favorite Writer: I'm going to be honest, I don't read as many books as I should! I read a lot in general though. So, I guess my favorite writers are my badass friends who inspire me with their analysis of pop culture every day!
Favorite sex scene from a movie/TV/book: Orange is the New Black's most recent season was problematic as heck, but there were some pretty awesome sex scenes. Also the book Prep, by Curtis Sittenfield. I read it in middle school and I was like oh. This sex thing. Sounds pretty cool!
Hidden Talent: I'm very good at painting my nails, even on my right hand. I get it from my mom.

In this week’s celebrity news, rapper Drake mocked Kid Cudi’s depression in a poorly written and insensitive line in his latest song  Two Birds One Stone, after a Twitter rant by Kid Cudi a couple of weeks ago. The lyrics reference Kid Cudi’s current stay in a rehab facility for help with his depression and suicidal urges: “You were the man on the moon, now you go through your phases/Life of the angry and famous/ Rap like I know I’m the greatest and give you the tropical flavors/ Still never been on hiatus/You stay xan and perked up so when reality set in you don’t gotta face it” As someone who likes rap music but does not religiously listen to it, I could not help but roll my eyes.  Drake’s… Read more »

Ruth Bader Ginsburg Is Boring Me

Beginning in August 2016, 49ers Football player Colin Kaepernick sat down during the national anthem as part of a symbolic protest against police brutality and systemic racism in our country. In an interview, Kaepernick said, “I am not going to stand up to show pride in a flag for a country that oppresses black people and people of color.” Many people found solidarity with Kaepernick, and soon began to stage their own protests during the national anthem. His movement is sweeping the country, starting dialogue, and also gaining the attention of haters. One of those haters just so happened to be the second woman in United States history to serve as a Supreme Court justice, Ruth Bader Ginsburg. In a recent interview with Katie Couric, Ginsburg called Kaepernick’s protests “dumb,” “arrogant,”… Read more »

The writer acknowledges that this topic is a sensitive subject. They would like to post a trigger warning for those triggered by mentions of self-harm.  I’ve been chronically depressed since the age of 12. Which sounds ridiculously young, but that’s life. When my family made a drastic move from Michigan to Georgia, my once lively self became quiet and withdrawn. I was suddenly eating more than usual, hiding it from my family. After class I would spend time in my closet upstairs, holding my breath and thinking of ways to make growing up go by just a little bit faster. I didn’t wake up excited for what happened next, and I didn’t find the world full of endless possibilities. For me, living was just something I did. I had no… Read more »

The first time I had ever heard the phrase “bitch” I was no older than seven years old. It was a rainy day in Michigan and my mom refused to let a white man over into our lane while driving. This infuriated him, and caused him to roll down his window. Along with a racial slur, the man leaned out of his car and the veins in his neck popped as he called my beautiful and beloved mother, a bitch. Tears formed in her eyes as she rolled up her window quickly, looked at me sternly, and said “Kristina. You are to NEVER repeat those words that you just heard.” The first time I was ever actually called a bitch was in 7th grade math class. After declining to date a… Read more »

I started going to the gynecologist at the age of 17. My mom saw it as a rite of passage. I was a young woman, in my first serious relationship, and suffering with typical high school acne. In her eyes, of course I was going to get on the pill. Never mind the fact that the first time I asked my mom what sex was she claimed she had “never heard of it.” Never mind the fact that when I say the word “nipple” my mom tenses up to this day. We were going to do things the right way. The progressive way. Kristina was going to take ownership of her reproductive health, and get on birth control. I consistently went to the gynecologist for the next couple of years…. Read more »