Black People Have Been Marching

This weekend, tens of thousands of Americans joined together all around the country to protest gun control in the March for Our Lives. The students from the high school in Parkland, Florida, which suffered a massive shooting taking 17 lives, have been speaking up loudly about their feelings on gun control. There was an overwhelmingly positive response from notable figures, even the White House sending out a message to commend the students for exercising their first amendment rights. The March for Our Lives is a good thing, and its response is even better. Youth from all around the country are tired of gun violence being ignored, and their determination is not going unheard.

However, this is not the first time gun violence has been protested this much before. What makes this time any different? The fact that these kids are white and from an affluent area doesn’t hurt. This is in no way diminishing these kids and what they’re saying. In fact, they themselves have spoken up about how similar calls for gun control from black people have gone largely ignored. They have acknowledged their privilege when it comes to how people perceive them. It’s these perceptions, specifically, that must be addressed.

Black people have been speaking up about gun violence for pretty much forever. Black Lives Matter is well known, but that’s only because it’s received so much coverage. In fact, one of the critiques against Black Lives Matter has come from people stating that black people ignore the crime within their own communities, which is simply untrue. In 2003, Dorothy Johnson-Speigt started Mothers in Charge in response to the murder of her 24-year-old son, specifically lobbying Congress to declare homicide a public health crisis. This is one of the many examples of black people standing up to gun violence.

Since Black Lives Matter is the most covered movement in recent times, let’s discuss the response to that in comparison to the response to the March for Our Lives. There was quite a bit of backlash to Black Lives Matter. All Lives Matter and Blue Lives Matter were two protests that arose, both completely missing the point and reality of what the Black Lives Matters activists were fighting for. Oprah, who commended the actions of the Parkland students, stated years ago that the Ferguson protests needed more specific demands, though they definitely did that. President Obama’s comments on the Ferguson protests didn’t necessarily glow with support as his did for the March for Our Lives.

There’s a clear disconnect in how March for Our Lives is being perceived as opposed to other black-led protests, which is why these protests might make a real difference. And that’s a really, really good thing. Furthermore, black people’s voices were heard last weekend during the March for Our Lives. Eleven-year-old Naomi Wadler made several headlines addressing the black children who have lost their lives to gun violence but haven’t been featured on the front covers of any magazines.

Overall, the March was a step in the right direction and extremely important. But, to ignore the clear bias that has kept movements like Black Lives Matter from receiving such a positive response is counterproductive and harmful. It’s empowering to see the Parkland students have so much power but also bittersweet when black people in the past have had so little. Black people are disproportionately affected by gun violence, and yet, their pleas and speeches and policy proposals have been largely ignored. It’s uplifting to see the change now, but it must include black people. Calls for gun reform must acknowledge these disparities, or the March for Our Lives is not nearly as progressive as it’s being perceived. 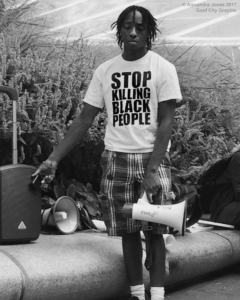