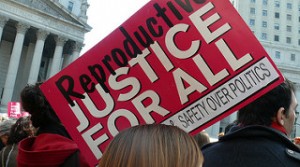 Over twenty years ago, California was swept up in the fervor of President Clinton’s “welfare reform” policies, and, following suit, cut welfare to low income families by instituting the Maximum Family Grant Rule. The rule denies additional aid to children born to mothers who already receive cash aid through the California Work Opportunity and Responsibility to Kids (CalWORKS) welfare program. This means that families who are enrolled in CalWORKS when they have a child can’t receive an extra $128 a month in order to pay for housing, food, and other necessary expenses that new parents inevitably incur.

In December 2014, California Senator Holly Mitchell (D-Los Angeles) proposed SB-23 in order to repeal the Maximum Family Grant rule, calling it “a classit, sexist, anti-democratic, anti-child policy” because of the ugly welfare queen stereotype (a woman who has children in order to receive more welfare) on which the rule was crafted. While SB-23 passed the State Senate this spring, it has yet to be put up for a vote in the State Assembly. Senator Mitchell has since set her sights on including SB-23 in 2016’s budget talks.

Repealing the Maximum Family Grant rule would be a small step in the right direction for reproductive justice in California. The rule is one of many in a long history of tactics the California government continues to use in order to prevent poor women of color from having children. Not only has the rule failed in its transparent attempt to coerce poor women into having less children, it also exposes the immense hypocrisy of government family planning policies. While poor families are punished for having more children, middle to high income families are encouraged to have children by way of federal child tax credits that families living under the federal poverty level cannot access. These inconsistent policies show that the government is literally invested in ensuring middle and higher income people have children. It’s no coincidence that the same welfare queen stereotype that’s associated with poor women of color doesn’t apply to middle class white women who can receive thousands of dollars for having children.

It’s easy to see that raising a child is an expensive undertaking that can plunge families further into poverty. Even though there are simple ways to alleviate poverty amongst children and their families that don’t regulate their sexual behavior, legislatures choose to cling to racist  stereotypes of the poor in order to rationalize reproductive coercion. Repealing the Maximum Family Grant rule would recognize that the right to give birth to healthy, thriving, children shouldn’t depend on the amount of money their parents make.