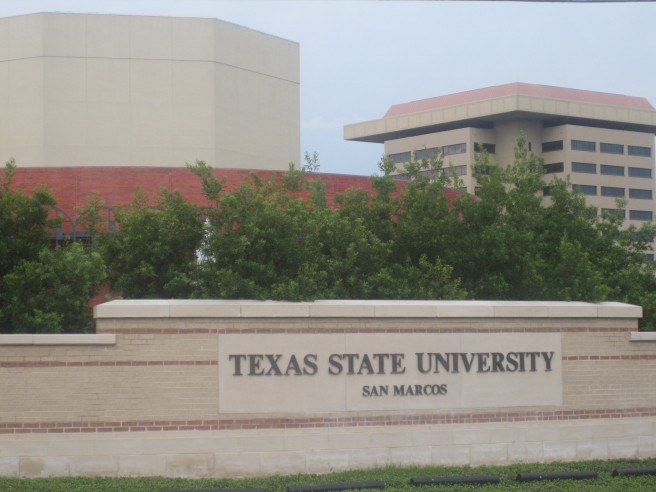 I am so proud to go to Texas State University with its over 35,000 students and to live in San Marcos Texas, one of the fastest growing cities in the country. Often times I get asked if living in Texas and being queer is difficult since Texas is, unfortunately, a state where marriage equality has not yet been achieved (but we’re getting there) and you can be fired in Texas just based on your sexuality or gender expression.

It’s definitely difficult to live in Texas as a queer person, but I am so thankful to be in an environment at Texas State where progress is being made.

Earlier this semester the city of San Marcos hosted their first pride parade, which was incredible to be a part of. Over 300 people gathered in the middle of town on the courthouse lawn to celebrate diversity in a way that they hadn’t been able to before.

Sylvia Sandoval, a resident of San Marcos, was the woman behind the pride event. After months and months of coordinating her plan came together and she couldn’t have been happier with the result.

“San Marcos has never has a big event like this for the LGBT community, I think it will make a difference in itself,” Sandoval said. “We needed this.”

I myself attended pride with a campus organization I’m a part of, a student chapter of the Texas Freedom Network  and it was great to engage in conversation with not just Texas State students, but with families and people from the community who all believe in equality.

Another mark of progress occurred in San Marcos just last weekend when the first LGBT bar opened in downtown. San Marcos resident, Chris Rue, named the establishment the Stonewall Warehouse taking its name from the historic Stonewall Inn that was the site of the Stonewall Riots in the 1960’s.

Prior to the opening of Stonewall, LGBT individuals did not have any nightlife establishment that they felt safe enough to call their own. Sandoval had been organizing what she called “Rainbow Nights” where a couple times a month existing bars in downtown San Marcos would hold nights specifically for the queer community, but finding a consistent place to hold them proved difficult.

With the creation of Stonewall, that worry has disappeared. Rue was adamant about the fact though that this isn’t just another bar.

“I want to be able to bring my family here and know that this can be not just a bar or a nightclub, but an entertainment arena, a meeting place, and a community center for like minded people, not just people from the LGBTQ community,” he said.

The changes to making San Marcos more inclusive are happening almost as quickly as the city is growing. With Texas State being such a large part of San Marcos, it’s important that it remain an inclusive university. The University has many safe spaces for LGBTQ individuals including ally training for both students and faculty, an all-day educational seminar for the community called Equality University that focuses on diversity and inclusion, numerous groups and events for queer folk on campus, and a lavender graduation ceremony that celebrates the accomplishments of LGBTQ students as they graduate.

While Texas as a whole is still fighting for equality (and it’s being threatened everyday) it’s important that change start in smaller communities like San Marcos and Texas State. Creating authentic change for the LBGTQ community doesn’t start with marriage equality. In communities like mine starts change starts with giving marginalized groups places where they feel can safe and accepted. The opening of a new bar or a city’s first pride parade may seem like small accomplishments but they mean so much when opportunities for inclusion have been missing from this city for so long.