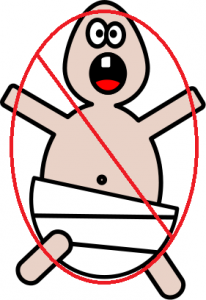 Our society is based in many ways on children and families. Our culture devotes massive amounts of time and resources to the raising of children. Certainly this is good, as children are the future of our society, and that investment is worthwhile. But one side effect of this culture is the automatic expectation that people have children.

I understand that as a man, I certainly don’t face the same type or intensity of pressures as my wife or any woman in our society does. And some of that comes from people believing that a woman’s job is to have children. So part of being seen as an adult woman in our society is having children.

So as a man I don’t face the same level of stigma for not having or wanting children, but there are other pressures. For example, since I am the only boy in my immediate family, many people expect me to work to carry on the family name. Of course this is an outdated tradition, dating back to when women were considered property and the only lineage that mattered was the paternal lineage. But since most couples adopt the man’s last name, this expectation continues. Also, there is a link in our culture between fertility and masculinity. You can’t be a real man if you don’t pass on your genes and have children.

Often my wife and I get mixed reactions when we tell someone that we don’t want kids. It ranges from some comment about us being selfish to telling us that we’ll change our minds someday. This can be a challenge, because even people we know that are reproductive justice advocates sometimes can’t seem to accept that we don’t want to have kids at all. And that is frustrating, because RJ advocates should understand as well as anyone that we should have total control over the decisions we make about our family.

In fact, we have discussed with doctors in the past about possibly performing a sterilization procedure on one of us. However, it became clear that most doctors are not willing to perform a sterilization on a person who is young and has no children. This is an example of the paternalistic attitude that we will eventually change our mind, and refusing the procedure now is actually helping our future self. Personally, I think it’s offensive that a doctor would not respect a choice we would be making about either of our bodies. We’ve talked about our decision, and we know that if we ever did change our mind about wanting to raise a child, we would prefer to adopt.

One of the most fun things about not wanting children is visiting family, usually around the holidays. On my side of the family, both of my sisters and their partners have kids. So every time we are around everyone, there are always people asking when we plan on having kids.

Here’s the thing about that. No one should be asking about your reproductive health or choices. It’s simply not their business. Between my two sisters, I have 4 nieces and nephews. But even then, I don’t ask them when or if they plan to have more. That’s their business and not mine.

All we want, and really all anyone wants, is to be allowed the freedom to make choices for their life without judgement. From some people, we get that. But others feel the need to interject themselves into our lives and offer unsolicited advice about having children. We’re perfectly happy and confident with our decision.