Chimamanda and the Art of Not Knowing 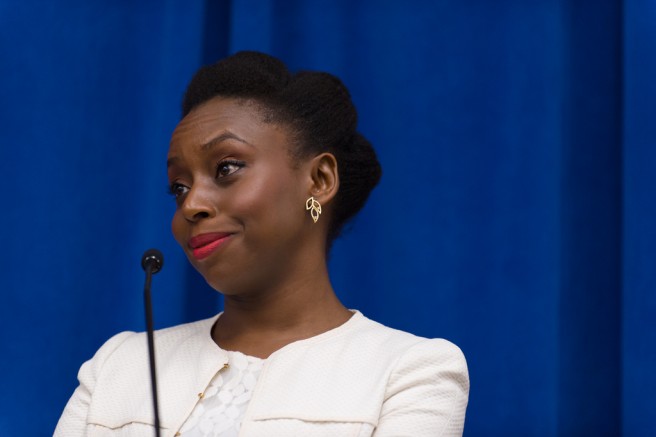 If you’re even remotely close to a queer person of color, you’ve probably heard all of the lively debate and discussion over Chimamanda Ngozie Adicihie’s comments on trans womanhood. As one of the most prominent popular feminists of our time, Chimamanda is a writer known for Ted talks and books, including the critically acclaimed We Should All Be Feminists, which aims to explain feminism in the 21st century. As a non-binary femme,  I’m not going to break down why Chimamanda’s comments were harmful, incorrect, and transmisogynistic. Multiple black trans women have done so, and anything I could come up with would pale in comparison. Instead, I would like to take the time to acknowledge one thing about Chimamanda’s comments that I know to be true.

She had no idea what the f*** she was talking about.

One of my most-used phrases is, “when you know better, you do better.” So what do you do when you simply do not know? What do you do when you’re a world-renowned feminist and you’re asked a question about gender that you don’t know the answer to? What do you do if you’re a regular ass person who just doesn’t know what you’re talking about? As someone who frequently finds myself in awkward situations, I’m going to offer some tips that I’m pretty sure the rest of the informed world wishes that Chimamanda had followed.

Yo, when I first heard Chimamanda’s statements on trans women, she had barely finished her sentence before I had finished twisting my face into my infamous side eye. As she spoke, it almost seemed as though she was not confident in the words she was saying. Afterwards, she offered two clarifications for what she said in the interview. However, the clarifications weren’t really apologies. They were just two statements reiterating what was said in the interview. If Chimamanda had taken the time to pause in the interview, and explain to the host that she did not feel comfortable answering such a question, I would not be writing this article. Also, instead of taking the time to pause after the interview, Chimamanda kept talking. It was as though she was in a rush to defend herself, which we all know is human nature. However, one way to right a wrong is to not continue to keep doing the same wrong using different language.

If you don’t know something, you should probably take the time to learn more about it. There are tons of resources online that could answer Chimamanda’s questions about feminism, gender, and how to make cake pops. We live in a world where access to information is literally at our fingertips. As a feminist scholar, Chimamanda has access to sources and texts that the average person does not. It makes no sense that I have a better grasp on gender without ever taking a class on or reading about it, than a woman who has built a career on feminism. An important note: When learning about gender, or other oppressed groups, research does not mean finding the closest member of that group you can find, and re-traumatizing them with prying questions. It means doing the grunt work, and looking at the resources available. If you have a close friendship with someone in this group, maybe you can ask some clarifying questions with their permission and after you’ve put in the grunt work. People do not serve as your walking unpaid encyclopedias.

I really wish Chimamanda had stopped and taken the time to realize that so many people disagreed with her. So many respected people in her field, were harmed by what she said. People she respected were upset with her. When I find myself in a situation like this, I really take the time to look within. Why are so many people I care about, upset with me? Is there something that I could be doing better? Is there something I need to change? This doesn’t mean that you should hate yourself. In fact, people often get defensive during situations like this, which causes them to not be receptive to what anyone is saying. However, this is a chance to humble yourself. A chance to realize that even though you ARE that bitch, you might not know the answer to everything. That’s okay! What is not okay, is to pretend that you do.

After you’ve taken the time to stop speaking, research more on the subject, and reflect on what you’ve done wrong, it’s time to do better. The best apology is fixed behavior. Don’t make the same mistakes again. Own up to your mistakes if anyone asks about them. Help others you may see struggling, and allow them to know the ways that you messed up. Realize that sometimes people may not forgive you, and they own that right. Don’t beat yourself up too much, but realize that your words and actions have a long-lasting impact on people. Work through holding the fact that you are a person worthy of dignity and respect, and the fact that you have hurt multiple people with your actions.