Choice Is a Part of Life 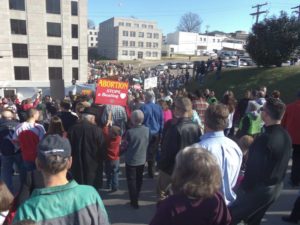 Twenty years ago from Monday, terrorist Eric Rudolph bombed an abortion clinic in Birmingham, Alabama, killing a police officer named Robert Sanderson and a nurse named Emily Lyons. About a week or so before, the March for Life in Washington, D.C. was led by Alabama students and activists. Abortion opponents have been protesting just as long as its advocates, and I find it hard to believe that actions like those committed by Eric Rudolph would be morally admissible to activists who are fighting to preserve life. At least, that’s what they really believe they’re doing.

I don’t mean to specifically target Alabama–though they are one of many states with a population that is majority pro-life. It was simply the coincidence of these events taking place that got me thinking more about the pro-life stance. There are several liberals who are pro-life, though I’ve never really understood why. So, I’ve decided to, for the who-knows-how-manyth time, to try and understand the other side and came out…not very surprised.

There are several articles offering the perspective of pro-life liberals, and how isolated they feel from the progressive movement for not sharing the same personal values as most others do. One common theme emerged in all of these articles that I duly took note of: an excessive usage of the word “I”.

Everyone is entitled to their own opinion. If you believe that, you have to also take into account other people’s opinions when you express your feelings about abortion. Abortion opponents personally believe that life begins at conception. Okay. That’s their opinion. The meaning of life is not officially defined anywhere–ethicists have several different interpretations, but there is no one meaning. And, if your meaning is that you personally, could never have an abortion, that’s okay.

But, when you come out and say you are pro-life, you are disrespecting the choice of other people. People, who may not share the same values as you do. People, who may not have the kind of privilege and resources to allow them to make the decision you can. For the who-knows-how-manyth time, being pro-choice is not being pro-abortion. It is about respecting other people’s choices and making sure that they have the right to make those choices. If you really believe in liberal values, value the life of the person who had to make the decision to have an abortion.

Remember, saying you are pro-life and going to protests like the March for Life (where Donald Trump stands up and condemns abortion just before going on record to say he’s not a feminist, thereby confirming his opinion that all genders should be equal) you are indirectly enabling domestic terrorists like Eric Rudolph. Because, after all, it was his personal values that lead him to bomb abortion clinics. I hope pro-life progressive activists can come to understand the message that their personal beliefs simply do not entitle them to dictate other people’s lives, and one day, we can say that being pro-life and being pro-choice is the same thing.

Image via the Wikimedia Commons