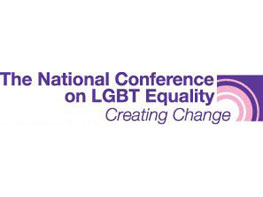 This weekend, I attended the Creating Change conference in Denver, hosted by the National LGBTQ Task Force. There, along with 4,000 other individuals, I spent four days discussing the issues that face queer people in our everyday lives.

Prior to this weekend, I had never attended such a large conference, much less one on LGBTQ+ issues. I was constantly surprised, and overjoyed, to see how many people attended the events and how diverse these people were. To me, this was the best part of Creating Change.

As a young person, I often feel like I, and my effort in the fight for LGBTQ+ equality, don’t matter. As a queer person, I feel like my identity is not real and recognized by the majority of people.

All of that was different at Creating Change. My identity was recognized. It was celebrated and affirmed. I felt like I fit in because I could look around the room and see other people who identified as I did. There was so much diversity, but with that diversity came an inclusive group.

I was also surprised to be taken so seriously as a young person. It’s often intimidating to be young and participate in activism. There are people 10, 20, 50 years older than me doing work that I previously perceived to be more impactful and more important. Creating Change reinforced the idea that every person is important.

Many of the workshops and panels that I attended were youth-led and about youth issues. I attended a workshop hosted by two college-age students who discussed sexual education. Their prevailing lesson was that sex ed should be “for us, by us.”

I was also lucky enough to be a panelist on a session about LGBTQ+ sexual assault on college campuses. There, people much older than me listened to what I had to say about my lived experiences and the community that I come from. They paid attention, they responded, they did not speak over me.

I was surprised by this, not only because I did not think my voice mattered that much, but because I had never realized I thought that way before. It took being recognized and appreciated to realize that I had spent the last few years feeling like I, and my efforts, didn’t matter.

This is incredibly important to realize because the LGBTQ+ community is made up of multiple diverse groups and all of them have, at one point in time, felt unimportant and unrecognized. When you’re a minority group within another minority group, you can often feel like you’re drowning, like no one is listening to what you have to say. At Creating Change, everyone had a space to speak.

I was worried that Creating Change would leave me feeling inadequate, like I’m not doing enough in my own community. I was worried that I would meet and speak to all these people who are doing it “better” than I am, that people were doing more than I was. I went into Creating Change expecting to learn a lot, but also expecting to be talked at and not with. However, I left feeling inspired and empowered in ways that I didn’t think possible. I hadn’t realized how much of my identity as a bisexual woman was under-appreciated until someone took the time to appreciate it. I hadn’t realized how much my young age made me feel inexperienced until someone took the time to listen to my experiences.

I am grateful for how worthy the plenary speakers, panelists and conference attendees made me feel and for how they inspired me to keep fighting for the equality of LGBTQ+ issues. I went into the conference thinking that I was just a small drop in the ocean and that my effort didn’t matter, but I left feeling important.

Thank you to the Creating Change participants for rising me up. I hope that if you attended, you feel the same way I do—for the first time in a long time, important, affirmed, recognized, real. The tag line of the conference was “Be You,” and I finally feel that I can, because I finally feel that I matter.