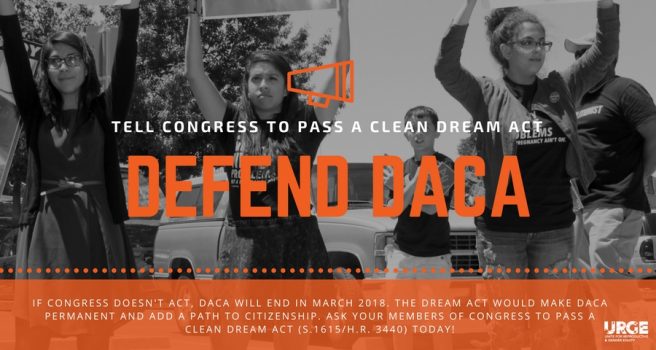 What week is it? Regardless of the date, I can tell you that it sucks. Every morning we wake up to a new fresh hell wondering what this administration can retract or enact. In the year of our Lorde 2017 it’s easy to feel pretty hopeless. I, however, am here to tell you that even though each day brings another round of reasons to be angry or terrified , that does not mean that we can forget about what came the day, week, or month before. With constant attacks on our immigrant community, it is important that we stay vigilant, particularly with the timebomb of DACA’s expiration date looming. As early as March of 2018, over 800,000 immigrants who were brought to the U.S. as children are at risk of deportation.

If you were anywhere near the Internet two months ago, you saw the #DefendDACA campaign and the outrage news of the repeal generated across communities and movements. While it is, of course, important to support activism in other movements (such as Immigration Justice specifically), even when you do not directly work in them, I feel that it is especially important to draw attention to why advocating for reproductive justice means advocating for immigrant justice as well.

At URGE, we use SisterSong’s definition of reproductive justice: “the human right to maintain personal bodily autonomy, have children, not have children, and parent the children we have in safe and sustainable communities.” The Deferred Action for Childhood Arrivals (DACA) program was created first and foremost to protect children (aka DREAMERS) that were brought to this country by immigrant parents. Now that these children are grown up, our lawmakers are questioning whether they are still worth protecting.

While the mainstream DREAMER narrative is something we use to justify these immigrants as “productive and law abiding citizens,” defending DACA from a reproductive justice standpoint means that we not only defend those DREAMERs, but the parents who brought them here and the communities that these families belong to. DACA status allows these undocumented young people to seek reproductive health care without fear of deportation, keeps their families intact, and raises them in the only country they have ever called home. If that is not a direct priority for those of us working towards achieving reproductive justice, then I don’t know what is.

Any way you slice it, protecting members of our undocumented community is something people working in the reproductive justice community need to be committed to across all intersections. For some queer undocumented people, going back to their home countries is not an option. According to the Bureau of Justice Statistics, LGBTQ immigrants are two times as likely than the general population to be sexually assaulted in confinement after being detained. Undocumented survivors of sexual and/or domestic violence are also deciding not to talk about or report their assaults for fear of ICE collaborations with local police. Those in need of health care, abortions especially, are not seeking medical attention for the same reason. ICE agents are blocking roads, showing up at elementary schools, raiding houses at random, and terrorizing families at every turn. How are immigrants supposed to live their lives when every institution in this country is working against them?

Luckily, there are many organizations, both local and national, committed to fighting for our DACAmented and undocumented immigrants. We at URGE are here to do our part in collaboration with these organizations and to mobilize our base to make sure that we spend the next three months working to hold our lawmakers accountable to pass a clean DREAM act, which would make DACA permanent, add a path to citizenship and would not increase funds for border security and detention centers . It is important that we recognize DACA and the DREAM Act as an opportunity to pass legislation that makes this country a safe and accessible place for anyone who wants to call it home. If we all commit to this, maybe we can find a way to make next week and the weeks to come not suck.

Join us: Take action now and support the passage of a clean DREAM Act!

Written by Rebecca Gorena. Rebecca is the Western Field Coordinator and is based in Austin, Texas.