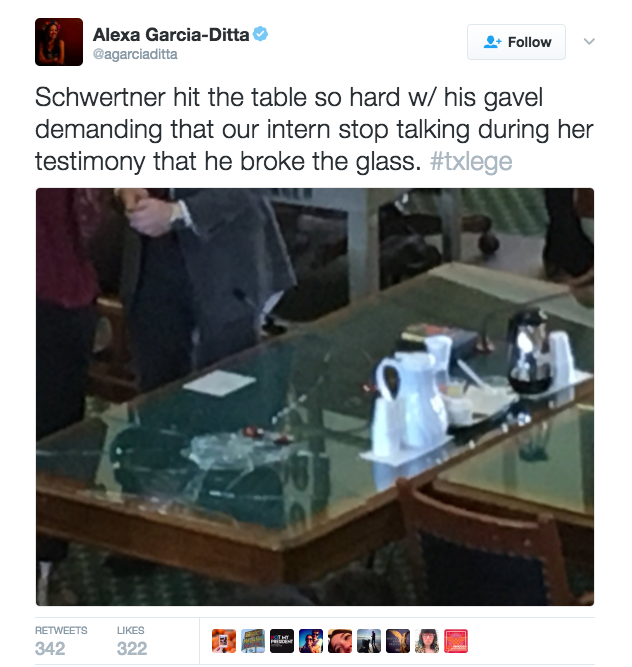 Pro-choice activists gathered at the Texas state capital this Wednesday to testify against three preposterous anti-choice Texas senate bills. This included ardent outcry against proposed senate bill 415 which would make it a crime for doctors to perform surgical abortions in Texas. Proponents of the bill, such as its anti-choice author Charles Perry (R-Lubbock), claim that it protects children, but the vengeful, persecutory nature of the bill demonstrates otherwise. Like nearly all anti-choice legislation proposed in Texas this session, this bill aims to shame individuals who have or provide abortion care.

Discussion during the hearing was explosive. Jezebel reports that the Health and Human Services Committee Chairman attempted to silence pro-choice activist Maggie Hennessy by pounding the committee gavel. In his urgency to cut Ms. Hennessy’s testimony, he smashed the glass table he was using. Lucky for the committee, reproductive rights organizers are accustomed to shattered glass.

But back to the bogus bills. Lets start with the obvious facts –anti-choice politicians don’t give a damn about families and children. If anti-choice politicians honestly wanted to improve the lives of all Texans, they wouldn’t have decimated funding for women’s healthcare programs, or shunted a million dollars to fund fake, non-medical clinics in place of actual reproductive healthcare. If these anti-choice politicians really do lay awake at night sweating at the thought of all of the hurting children in the state, why not move to DO something about the children that continue to die as a result of abuse after the child protective services of Texas fail them. Just a suggestion.

Oh, and in case lawmakers missed it, Texas also has the highest maternal mortality rate of any US state as well as the highest rate of uninsured individuals. Since anti-choice politicians are so concerned about children and families, why not try and ensure that all children and families have access to non-discriminatory, comprehensive health insurance and health care? Again, just some suggestions.

Where are anti-choice senators’ outcries about Texans dying due to unsafe pregnancy and delivery, or due to lack of healthcare? Where is the outcry for the children who continue to die at the hands of their abusers, despite the fact that the state is supposed to be protecting them? What about our outrageous childhood poverty rate, or the number of children who come to school hungry because there isn’t steady food access at home?

There aren’t loud outcries about Texan children’s wellbeing from anti-choice politicians because childhood wellbeing is not the primary concern. No, the primary concern of anti-choice politicians in Texas is state control of sexuality and reproduction – especially women’s sexuality. Women’s sexuality has been and continues to be considered dangerous among anti-choice proponents. The immense power of a person in control of their own life is considered a threat to the ruling order unless subjugated and controlled. Criminalizing abortion and shaming patients and providers is how anti-choice proponents are currently attempting to control bodily autonomy.

If you too are incensed at this continued tom-foolery, you are in good company! NARAL Pro-Choice Texas has set up a link so that reproductive justice activists can speak out against these bills. You can find that info here.

*Side note: I’ll continue to watch and write about this but you better bet I’ll have plenty to say if this trash bill ends up costing tax payers due to ANOTHER lengthy court battle over unconstitutional anti-choice laws.