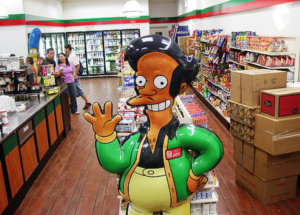 Last year, South Asian comedian Hari Kondabalu released a documentary film entitled The Problem with Apu that included South Asian celebrities discussing the impact of The Simpsons’ character, Apu Nahasapeemapetilon. The character has been criticized since the inception of the show for being a racist caricature of Indian-Americans, not helped by the fact that the character is voiced by a white actor doing an exaggerated accent. Kondabalu’s documentary includes interviews from South Asian celebrities who all have had similar experiences in direct result of the character: microaggressions and racial slurs with several of them being asked to do the Apu accent while auditioning for roles in Hollywood. The producers of The Simpsons have remained largely indifferent to these concerns, but an episode that aired Sunday evening directly addressed them head-on in, quite possibly, one of the worst ways they could have.

In a particularly telling scene, the character of Marge Simpson is reading a story to her daughter Lisa that was considered offensive. Marge asks Lisa what they are supposed to do about that, and once Lisa answers, the camera pans to a picture of Apu–and here’s the kicker, the picture is accompanied with the message “don’t have a cow”. This not only insults the legitimate concerns of a community but also insults the Hindu religion–clearly indicating that they’re referring to the controversy. Lisa laments the fact that something that was considered fine years ago is now considered politically incorrect, ending the conversation with no intention to address the issue further or ever again.

As a South Asian American, I have not given a lot of thought to Apu. I did not grow up with the Simpsons during its prime, so I was not even familiar with the character until discovering the show a couple of years ago. In all honesty, I really liked the show which allowed me to ignore the stereotypical character of Apu. This was until I watched The Problem with Apu. Sunday night’s episode of The Simpsons was the last straw for me, especially because of the response to the episode.

The response to this episode was just as positive as it was negative. Many applauded The Simpsons for not giving in to “liberal snowflakes”, claiming that the show makes stereotypes of many different types of communities and not only the South Asian community. This is completely missing the point of The Problem with Apu. The problem is so much more than being politically incorrect. For other communities, The Simpsons was not their only representation. For South Asians, Apu was their only representation.

Apu was, for some people, the most prominent and only representation of a South Asian person they’d ever encountered. The effect that has on the perception of the larger South Asian community is undeniable. The producers of The Simpsons have seen the documentary. They have heard people talk about how this character has hurt them and negatively impacted their life growing up in America. Despite this, they don’t care. The situation mirrors a scene in a recent Roseanne episode, in which the titular character mocks shows like Fresh Off The Boat and Black-ish for being nothing more than shows that depict people of color. Another example of people insulting and belittling the concerns of people of color to be accurately represented in the media.

It may be difficult to understand how this is a big deal without personally experiencing it. From the viewpoint of a white, cisgender man, I can see why this argument may sound ridiculous. This is a cartoon that hasn’t been truly relevant in years. Who cares about this dumb character? It’s definitely not the only Indian stereotype, and certainly not the only depiction of brown face. The important difference is: Apu is a staple in pop culture. The positive response to this recent episode proves that and the strides made today are not enough to erase his impact as a racist caricature.

This is not the biggest issue South Asians face in America today, but the response to this episode is a slap in the face of all the progress we’ve made over the past few years. To also hear it from Lisa Simpson, who fans of the show know to be the most liberal character and a frequent champion against sexism and racism, was the icing on the “screw you” cake. People are not only missing the point–they are completely ignoring the feelings of an entire community. I cannot support the erasure of South Asian voices in the media and encourage stereotypical and inaccurate portrayals of my community that are just as offensive today as they were thirty years ago. You shouldn’t, either.