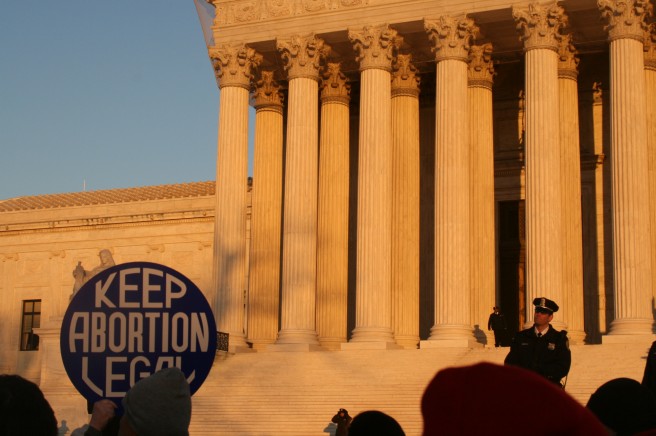 In 2013, Texans, yet again, had to endure other people making decisions about our bodies for us. When I say for us, I don’t mean to benefit us, I mean taking the decision out of our hands and the right to our bodies away. Wendy Davis fought for Texans in her pink tennis shoes and famous filibuster, unfortunately, HB2 was still passed in Texas. All clinics were required to meet ambulatory surgical center standards and abortion doctors were required to have local hospital-admitting privileges. The local requirement means a hospital within 30 miles and Texas is huge. There are rural areas all over this state.

In 2012 there were 41 clinics open, if HB2 becomes fully implemented, only ten clinics will remain.

Ten. Let that sink in.

Everything is supposed to be bigger in Texas, but it seems like basic rights and access to healthcare are only getting smaller than ever.

There isn’t a clinic within hundreds of miles of Lubbock. The closest clinic is in Fort Worth, which is roughly five hours away.

Luckily, young activists can never be stopped and we will not be silenced – just look to the creation of The West Fund.

The West Fund is an abortion fund created by a group of enraged, young activists who were tired of politicians making decisions about our bodies and are committed to helping people pay for and access abortions in West Texas and along the border.

Just yesterday, Sept. 3 2015, reproductive rights activists started the movement to take HB2 to the Supreme Court and give folks back the access we deserve. The Center for Reproductive Rights has filed an appeal of HB2 aimed at overturning the law and ensuring that all Texans have access to abortion, no matter what part of the state we live in.

I urge all of you reading this to stand with Texans and support and follow this case, it is everything our movement for reproductive justice stands for.

That is the beauty of young activism. Nothing, and I mean nothing, stops us. In the face of legislation that could destroy our abortion access, we lace up our pink tennis shoes and fight for young people all over the state. In the debris of clinics being shut down all over the state we love, we build programs like The West Fund and help people gain abortion access. When we have been pushed to the very bottom of politician’s priorities, we force our way to the top and seek out the Supreme Court.

2 Responses to “Everything is Bigger in Texas, Except for Abortion Access”