Last summer, I was absolutely dejected when no one wanted to go see some feminist punk rock in downtown Houston with me. Enter my ultra-kind lover, who, despite fear of crowds and noise, offered to drive us to the show. Fea, self-described riot grrrl Chicana punk out of San Antonio, Texas was playing and changed my entire life. They combine the thrashing, overwhelming, pure combustible energy of punk with sounds unfamiliar to many mainstream US punk listeners: Spanish lyrics and queer feminist perspective.

As an edgy suburban kid, I identified with the punk and alt-rock of the 1990s and 2000s, and Blink-182 remains a personal favorite (my lover surprised me with tickets for my birthday just this year). The overwhelming whiteness, masculinity and misogyny of the genre is very problematic, but I do love the music. 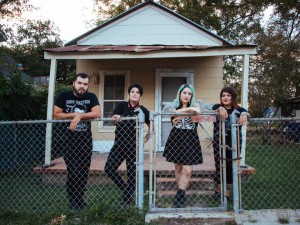 Enter Fea: the feminist punk rock group my heart had been yearning for, though it lacked the language to describe what it needed. When I arrived at that fateful punk show last year, partner-in-crime in tow, I was eager to hear the last couple bands of the night. Until I heard Fea. My descent into infatuation began when I couldn’t control my whole-body desire to spin and jump to Jenn Fea’s bass and completed when Letty Fea began to sing. Her voice and her lyrics swam singsong between Spanish and English, an energizing sound I had never heard in punk music. I was completely taken.

Fea fills this hole, not only in my heart, but also in the world. In many ways, they are the antithesis of all things mainstream pop-punk: Chicana, bilingual, women, queer, feminist. But,  at the same time, Fea is deeply punk in that they are inherently political and unapologetic. Since I saw them last summer, Jenn (bass), Letty (vocals), Phanie (drums), and Aaron (guitar), Fea has received the recognition they deserve from the likes of Bitch, Bust, Out, NPR, and Remezcla.

I especially enjoyed Spin.com’s prediction last year that Fea’s ‘Feminazi’ music video would single-handedly swing the election away from ole’ Cheeto-In-Chief. While that specific hope didn’t pan out, Fea’s contributions to radical progressive movements are undoubtedly meaningful. I whole-heartedly endorse Fea’s music as the soundtrack for the revolution. You can check out their music, news, and tour dates at their website.