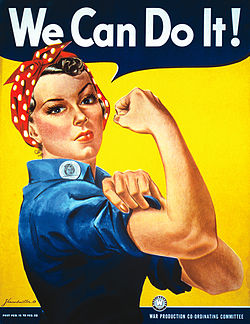 I was talking with a friend the other day about a girl she knows—an incredibly smart girl, with a 4.0 GPA in her engineering classes, who plans on getting married and becoming a stay-at-home mom after college.

My friend told me that it seemed like such a disappointment that this incredibly intelligent girl was giving up a promising career for an “M.R.S. degree.”

I told her that it was tempting for me to agree. Feminism and female empowerment means that ladies don’t need to get married or have kids—pursue academia and independence, girls!

I struggle with this thought sometimes. Getting married and having kids and staying home with them still sounds like submitting to patriarchal roles for women. And while, sure, that might be a stereotypical gender role for women, that doesn’t mean it is necessarily a bad thing.

You see, feminism and female empowerment really mean that women have a choice. They’re not just expected to get married and have kids anymore. They can be whatever they want—astronaut, doctor, scientist, and sure, stay-at-home mom.

I was reading a book entitled “Yes Means Yes,” that talks about this idea a little differently. The author of one particular chapter, Stacey May Fowles, explained that she’s a feminist and a submissive.

Again, on first glance this seems problematic because submissive is a stereotypical gender role. You want to say, “No, you don’t have to be submissive! You can be whatever you want.”

Which is true! You don’t have to be submissive… but if this woman wants to be, who am I to judge?

Female empowerment means having the option to be anything you want, not just the expectation that you’ll conform to gender norms.

This means that it’s okay for women to:

I think a lot of feminists and empowered women struggle with this issue. But empowerment can mean something different for every person.

So to myself and every person who struggles with this idea, we can’t push our own views of what liberation is onto other people. As long as someone is making an informed, consensual decision based on their own desires and needs, it’s okay with me.

Everyday Feminism recently published an informative comic that talks about a related issue. The author asked, “How do we know when someone is being sexually liberated versus being sexually objectified, since they sometimes can look similar from the outside?”

The answer is: power!

So if an empowered woman tells me that she can’t wait to get married and get straight to having kids… that’s her choice, so who am I to judge her for it?