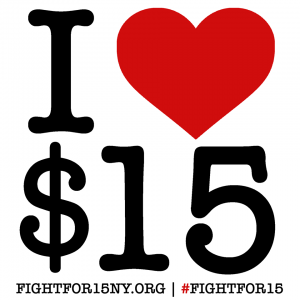 I got a what I thought was a welcome surprise during summer vacation leading into my last year at UC San Diego when Janet Napolitano, President of the University of California, announced that the UC system would raise the minimum wage to $15 by 2017 for all of its workers and contract workers. The initial boost to $13 starting Fall Quarter would’ve given me a $2 an hour raise at my on campus jobs, exciting news for a debt-saddled coffee-dependent college student.

Yet, for all of the great press the University of California has received in the wake of their announcement, it was a lukewarm response to a broader grassroots effort to secure a living wage for everyone. One aspect of the plan that has been largely overlooked is that it fails to extend the $15 minimum wage increase to those who work less than 20 hours a week. Doing so effectively freezes undergraduate student workers out of what Napolitano deemed “the right thing to do for our workers and their families…given the mission and values of our public university.” Making an exception for part-time workers, which includes undergraduate student workers who are often prohibited from working more than 20 hours a week, demonstrates the University of California’s continual antipathy towards the well-being of the students for which the University of California system was created.

For undergraduate students who rely on the income from their on-campus jobs to support themselves and lead healthy, fulfilling lives, Napolitano’s announcement literally pays nothing but lip service. Refusing to pay student workers a living wage denies young people the right to maintain control over their own bodies by forcing them to make sacrifices that affect their health and well-being. If students have to choose between paying for textbooks and eating three meals a day, their choices are being dictated by economic policies imposed by the UC system. The reproductive justice movement recognizes that economic exploitation severely limits people’s ability to make decisions about every aspect of their lives, including their reproductive health. Since income disparities map onto racial demographics, working class students of color are disproportionately hurt by this decision.

Demanding that undergraduate student workers are paid a fair, living wage for the essential labor they do to maintain the University is not radical or unreasonable. In fact, $15 an hour is one component of ensuring that students have control over their bodies and the direction of their lives, something those of us in the reproductive justice movement can certainly stand behind.