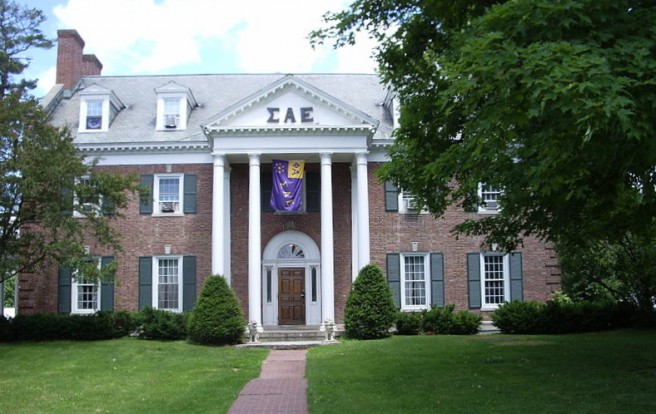 By Kane5187, via Wikimedia Commons

I’m sure by now most people have seen or read about the video that was taken of members of the SAE chapter at Oklahoma University chanting racial slurs. There have been countless articles written on it, tons of media coverage, and lots of social media interaction. The hashtag #SAEHatesMe has been used to talk about all sorts of issues relating to racism in Greek life.

After this video surfaced, OU president David Boren issued a statement condemning the actions of this group. I should applaud the administration for their swift action, but I also think that making a statement that “Real Sooners are not racist” is a little bit ironic. However, the statement issued was undoubtedly further than the University had to go to deal with the problem, and going out of their way to have a conversation about race is admirable. As of the writing of this article, the chapter has been disbanded and asked to leave campus, and two of the leaders of this chant have been expelled from the University, one of whom issued an apology.

This incident is just the latest in a long stream of negative press about the activities of Greek organizations over the past few years. These actions range from allegations of rape and sexual assault, to hazing incidents resulting in death, to racist chants and theme parties, among other things.

What does this mean for Greek life? Are these isolated events perpetrated by a few bad apples, or are they representative of these organizations as a whole? Is there something about this type of institution that fosters an environment where this behavior can thrive?

While I am talking about the Greek system, I should make the distinction here that I am not part of Greek life. I have been told this makes me biased, but of course that would also be true if I was involved.

Is Greek life inherently racist/sexist/etc. or is it just the actions of the individual? Certainly Greek life reinforces the gender binary. Many Greek organizations, like SAE, have roots in patriarchy and white supremacy. But as the gender binary, the patriarchy, and white supremacy are all parts of our culture at large, this may be a product of our culture rather than a driver of it. It is a difficult issue to sort out.

There may be something about the environment created by Greek life that encourages this behavior. After all, being surrounded with people that think like you isn’t the best way to increase self-awareness. And since these groups control their own membership, it is unlikely many chapters have members that would challenge the prevailing attitude of the group.

In any case, my perception of the Greek system is lukewarm. I understand the positive influences it can have on individuals and sometimes communities, but I also believe that an institution based on exclusionary principles generally doesn’t align with inclusive ideas.

Incidents like this show that racism is alive and well in this country. And what may seem like a simple offensive chant that isn’t really hurting anyone is actually part of a system that actively oppresses people of color. Ideas influence action. When you think about it, these young men in a fraternity will continue on to be leaders in our society. And if they have these ideas now, how will they act when in power?

I have noticed that any time there are any negative allegations about a Greek chapter at a University, there are many who are quick to point out that the chapters at THEIR University aren’t that way. Not all Greeks are like that, they say. After all, look at how much our chapter does in our community!

Certainly, there are Greek chapters that are extremely positive influences on their communities and members, just like there are men that aren’t horribly sexist and white people that aren’t actively oppressive. But that isn’t the point of having these conversations.

Similarly, the point of talking about Greek life and racism, or rape culture, or hazing, or whatever it may be, is to examine the underlying systemic, institutional, and cultural factors that cause this behavior to be more prevalent in these organizations. It’s supposed to be a conversation about what is causing these issues.

The most important concept that I think applies here is guilt by association. At some level, anyone affiliated with a national organization that has a problem with racism, or rape culture, or hazing, holds some amount of responsibility for that. It doesn’t matter whether that’s what the individual or the chapter is doing, simply obtaining and maintaining affiliation with those that are doing those things is enabling that behavior.

Part of being in a group that emphasizes community is holding each other accountable. To their credit, I have seen many Greeks who are actively trying to change this culture. They acknowledge the issues posed by these organizations, and take responsibility for making it better. But, until the day comes when accountability is not optional, these issues will persist.

One Response to “Fraternities and Guilt by Association”