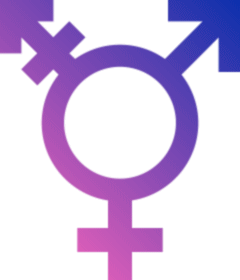 Last week I wrote about sexuality and how contrary to what we have been raised to believe, sexuality exists on a fluid spectrum. This week I’m going to talk about gender and how it too exists on a spectrum.

In Western culture we were raised to understand that gender exists on a binary, male and female. It was explained that whatever genitals we have at birth are what determines our gender for the rest of our lives. However, I’ve come to learn that gender itself is a social construct and isn’t determined by our genitals but rather by our minds.

Cisgender is the term given to those of us who identify mentally with the gender we were assigned at birth. Slowly our society has begun to become more accepting of transgender people. Transgender in this case meaning when an individual’s assigned birth sex does not match the gender of their mind. People like Laverne Cox, Janet Mock, and most recently, Bruce Jenner have become media icons for the transgender community.

Gender is still more expansive however than just male, female, and transgender. I feel like a reason why the concept of being transgender is slowly becoming more accepted is because it too relies on the existence of the binary. It’s seen as only acceptable to be trans if that individual makes a full and unnoticeable transition from one gender to the other. That in turn brings up the concept of “passing” and is a reason why so many acts of violence are committed against trans people and particularly trans women of color.

Aside from being male, female, or transgender there are many other ways a person can identify their gender. Also as a quick note, gender and pronouns are something that go hand in hand. It’s important to understand that you cannot tell a person’s gender just by looking at them, because even though we have been trained to correlate a person’s outward appearance with their gender identity, gender is something that lives in all of our minds and therefore cannot be determined physically. If the situation warrants it you can ask someone what pronouns they use, and then continue to use whatever pronouns they choose. If not, the safest thing is to use gender neutral pronouns (they/their/them) until further notice.

Here are some other ways a person can identify their gender.

This is a gender identity where an individual identifies as having no gender, and/or feels like they have no gender.

An identifier meaning “two genders”. Someone who identifies as this may feel to be simultaneously, or consecutively, two separate genders in one body. This is typically, but not necessarily masculine and feminine.

One who is born with sex chromosomes, external genitalia or an internal reproductive system that is not considered “standard” for either male or female.

About 1.7% of children are born with mixed sexual anatomy that makes it difficult to label them male or female.

A person whose gender identity is comprised of many gender expressions, may identify as Pangender.

Training our brains to exist outside of the binary can be challenging, especially when it has been engrained in us since birth. It is a process that takes constant work but it’s worth it to be able to understand and appreciate our existence within our own bodies.

The rest of the list on sexual, gender, and romantic orientations can be found here! http://safespacenetwork.tumblr.com/define