Ginger Snaps, Get Out, and my search for feminist horror films

In October, inspired by the Canadian horror film “Ginger Snaps,” I tried to write a piece about feminist horror films. This brief foray ended in disgust after a 6-hour search through feminist horror movie recommendations and reviews left me feeling like there might not be such a thing as a feminist horror film. I thought perhaps Ginger Snaps was a rare, shining exception in the trash bag of horror films I researched and watched. I knew, of course, that this couldn’t be the case; that there were undoubtedly other insightful horror movies circulating somewhere that I might enjoy. But at the time, I had fear fatigue, and the piece never happened.

The recent release of Jordan Peele’s new horror film “Get Out” redirected me to this question of horror’s social commentary. All reviews of the film highlight its poignant social critique of race relations in the United States, insidious storytelling, and cinematic artistry. For me, Peele’s film is absolutely critical and illustrates the importance of artists to popular culture and conscience. What could be more important than storytelling? What is more essential than weaving narratives and framing conversations? I am in love with the possibilities this film represents for art as activism.

But it’s a horror film! At first I was astonished that there might be a horror film I actually wanted to see. When I have tried to write about and enjoy horror in the past I found it impossible to watch past the recycled, oppressive tropes. The movies would glamorize the torture of female bodies, which I have found feature prominently in horror films, though they are usually naked and twisted in pain. Or otherwise I have seen horror films promote toxic cultural myths. A mother who is not maternal?! The horror! A young woman who grew up without a “father figure”?! The horror! Teenagers having sex?! First lets portray it as soft core, but then: the horror! These narratives never spoke to me beyond pissing me off.

I even found fault with so-called feminist horror films. Rosemary’s Baby? I decided I didn’t like the portrayal of birth as a violent, frightening experience. The Craft? I decided it relied too heavily on teenage girls as petty and ruled by their emotions, so I couldn’t love it. But Ginger Snaps, the Canadian film from the early 2000s that I mentioned earlier? Ginger Snaps is the closest my hypercritical self has ever come to finding feminist horror perfection. 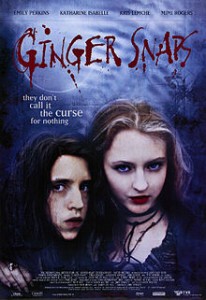 Okay, I’m about to write about some of the film, so if you don’t want the film spoiled, go watch it and then finish this post! The film follows Ginger and Bridgette, two teenage sisters in suburban Canada. They delight in frightening their classmates with their theatrical love of death and horror. The acting drama is punctuated when the sisters are attacked in real life following Ginger having her first period. The audience understands that Ginger’s bleeding is what draws the carnivorous creature roaming the town to attack the sisters. I connected with this storyline hard, because it mirrored the real life threat that I experienced as a young menstruating girl. Before my period I was a carefree child, but after my period it became clear that my body was dangerous. Family members insisted that I stop wearing only my panties around the house, and demanded that I wear a bra if I was going out in public. Confused and ashamed, I relented. For many, puberty is a perilous passageway for learning that your body is sexualized by the outside world, regardless of your utter disgust with the notion.

I also cried during the movie for its portrayal of sibling relationships. Ginger, the older sister, is changed by puberty, while Bridgette, her younger sister, feels left behind. Though this is both good because Bridgette is not at the mercy of “the curse,” it is also bad because it distances her from her sister and rapidly transforms Ginger into an unrecognizable monster-human-traitor.

By highlighting the perils of coming of age in a society where women’s sexuality is repressed and demonized through the eyes of a teenage girl, Ginger Snaps is a radical and necessary film. There are other aspects of the story I like, such as adult admonishment of Bridgette when she tried to voice her concerns about her ailing sister, which illustrates the very real silencing of young people. I was also pumped when, at the end of the film, the heroine didn’t have to enter into a heterosexual relationship to be somehow “complete.”

Ginger Snaps and Get Out have turned me on to horror and broadened my appreciation and expectations for the genre. I am tempted to feel that artists have an obligation to use their platforms and power to tell difficult stories and have uncomfortable conversations. I’m excited for the future of horror this year but in the mean time, I am in desperate need for further horror film recommendations! If you know of a film that provides illuminating social commentary and an overwhelming adrenaline rush, please comment below and send it my way!