It’s time to face the truth: our government isn’t going to care about us until we force them to.

And by us, I mean every person residing in this country who isn’t a cishet white man. This should come to no surprise to most — take a look at the people residing in our very Congress, and it almost makes too much sense. Take a look at our president who just mocked Dr. Christine Blasey Ford for…? I don’t know what to say anymore, and I can’t bring myself to think about what that excuse for a human being says anymore.

When Dr. Christine Blasey Ford spoke up against the frat boy currently trying to serve on the highest court of the land, I thought it might make a difference in the way Anita Hill’s bravery did not twenty years ago. Dr. Ford’s whiteness as well as the current climate surrounding the #MeToo movement put her testimony at an advantage, but it wasn’t enough. The frat boy hasn’t been confirmed yet, but it certainly seems to be heading that way. And, let’s be honest, if a white woman’s tears can’t get senators to believe survivors, what can?

There was a moment of hope in the hearings last week, however, when Senator Jeff Flake moved to postpone the confirmation until after an FBI investigation. Whatever difference this might make must be accredited to the brave Ana Maria Archila and Maria Gallagher for bearing their hearts, their stories out to him. Heroes they may be, they are human as well, and I lament the fact that they had to go through that experience. Maria Gallagher had never spoken publicly about her sexual assault until that encounter in the elevator, and she shouldn’t have had to. Neither should Ana Maria have. Nor Dr. Christine Blasey Ford and Anita Hill and all the other brave survivors showing their trauma to a world that doesn’t believe them.

Late night television has done their part in joking about the ridiculousness of the situation. But no matter what they’re saying about the hearings, it’s too soon to see a bunch of white men joke about this. Whether or not they’re liberal or in support of Dr. Ford doesn’t matter, the very fact that they can joke about this — as well as the fact that everyone in late night is white except Trevor Noah — is an example of their power in society. There was nothing funny to me about those hearings. It was just sad.

Why did it take that much for Jeff Flake to have felt an ounce of guilt? Why did Dr. Ford’s testimony not make a difference, nor Anita Hill’s? Why is the tagline, Believe Survivors, spread with such vehemency? Why are there still people who truly believe that most people are lying about their assault? That’s the thing, though. I think it’s safe to say that most people believe the survivors. They just don’t care.

I cannot believe that those senators who voted in favor of the confirmation are truly under the impression that Dr. Ford is lying, but I certainly believe they don’t care. If they really cared, they wouldn’t have allowed Angry Frat Boy a chance to serve on the Supreme Court at all.

Congress isn’t going to save us. Our president certainly is not going to save us. We have to save ourselves. We cannot allow for survivors to be taken seriously only when they are forced to share their trauma to the world. We can’t just believe survivors — we have to care enough to create a society that will protect them. We have to vote. I know, I know — you’ve heard a million times the importance of voting, but are you registered to vote? Because, if not, please do so right now. Recent polls have shown that only about twenty-eight to thirty-eight percent of millennials are certain they’ll be voting in the midterms. That’s not enough!

November 6: we have to show up to the polls. But, that’s not it. We have to show up everyday, make our voices loud and clear. We have to run for office ourselves, be the representatives we wish to support, and we have to change the system. Discriminatory voter laws are increasing which should only motivate us further. Use the power we have, because if we don’t start showing up soon, they might just take it away. 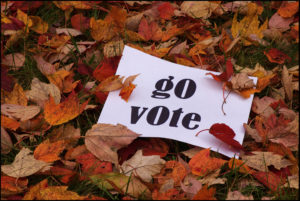