Here’s How We Can Actually ‘Restore Life in America,’ Pence 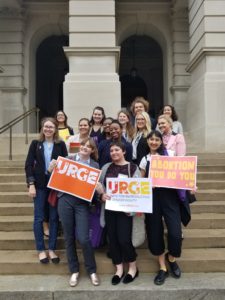 On Feb. 27, The Hill reported that Mike Pence said he hopes legal abortion will end in the United States “in our time.”

At a luncheon for the Susan B. Anthony List & Life Institute, Pence said “I know in my heart of hearts this will be the generation that restores life in America.” Pence has a track record of restricting reproductive health care access in his time as vice president and as governor of Indiana.

He said to the luncheon attendees that “while we have made great progress, we have much work left to do,” noting the federal 20-week abortion ban bill that the House of Representatives passed earlier this year; that bill was not passed by the Senate.

We have much work left to do to enhance and “restore” in the U.S., Pence, but not in the way you think.

The first step to “restoring” life in America is to keep abortions safe and legal. Restrictions on abortion often lead to restrictions on all reproductive health services, including prenatal care, STI tests, breast cancer screenings, and birth control prescriptions. When these services are restricted, women and children will suffer from the effects. When these services are accessible and affordable, they improve and sometimes even save the lives of Americans.

The next course of action is to implement a universal health care program in the U.S. There’s surmounting evidence that America’s medical bills are much higher compared to other developed countries, and our citizens are struggling to pay for even minor medical procedures. Health care saves lives, but only when it’s effective, accessible, and affordable. Let’s take a hint from Canada and integrate a universal health care system.

Another way to save lives in the U.S.: tighten the drawstrings on gun laws. There is a critical need for gun control, especially after the high school mass shooting in Parkland, Florida, that left 17 people dead. Ban AR-15s; they do not belong in the hands of citizens. Follow Oregon’s lead and bar domestic abusers from owning firearms. Legally require training before you can conceal carry a weapon, something Kansas does not do and should do.

Guns kill an average of 96 Americans per day. By implementing preventative gun safety laws, more citizens will live without the threat of gun violence.

Finally, post-secondary education in the U.S. is in critical need of reform. University education is increasingly becoming more expensive, sending students into more debt that stays with them for years after they receive their degrees. This debt can set people back financially, especially when we consider the rising cost of health care, housing, and so on.

I am so thankful that I have academic scholarships that, for the most part, cover the cost of my education, but I don’t think university education without debt should only be for the students who got As in high school. All types of post-secondary education, from trade school to medical school, should be affordable for all.

There are many more ways to enhance and save American lives — like ending mass incarceration, reforming the foster care system, etcetera — but here’s a good list to start with. What will not help, Mike Pence, is restricting the decisions we can make concerning our bodies and our health. Abortion is not a dirty word, and it’s not a practice that should become illegal “in our time” or any time.