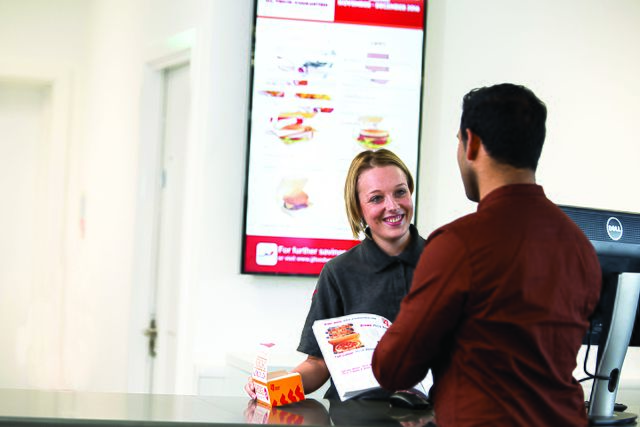 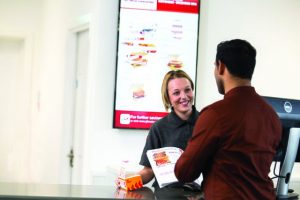 Last semester, I worked as an usher in my university’s basketball stadium. Overall, it wasn’t a bad job; I was getting paid for watching basketball games. However, the job required me to stand at the top of an aisle for about eight hours.

Patrons often said hello to me as they went to find their seats, sometimes asking for directions to the closest bathroom or their seating area. But, there was one time when a man tried to hit on me while I was working.

He showed me his ticket and asked which side of the aisle his seat was on. To my memory, as I gestured to one side of the aisle, he saw a ring on my finger. “You’re already engaged? How old are you?” I told him that I wasn’t engaged; the particular ring I was wearing was a gift from my mom. I do not remember if I disclosed my age or not, but I do know that the question made me uncomfortable. This man was probably in his mid-twenties, a bit older than my then-19-year-old self. I was single at the time, and I thought about faking a relationship to deter this guy, since I knew by then that he was trying to flirt with me. But I didn’t, afraid he would see through the lie that was meant to get him to go away.

Now knowing my relationship status, he wanted to chat for a bit. He told me he wasn’t a student at Kansas State, but was stationed at the nearby Army base. I engaged in the conversation as little as possible, just enough to be polite and friendly to a patron of the stadium. But I didn’t offer much personal information.

After a while, the guy said he wanted to get to know me better when I wasn’t working. Seemingly, he picked up on the fact that I was not offering any personal information about myself, but didn’t connect that to the fact that I was not interested in knowing him, just being nice since it was part of my job to do so. He wanted me to put my number in his phone.

“I can’t do that on the job,” I said. So he then asked me to meet him at the mall that coming weekend. I then had to tell him that I was not interested. He said that was fine, but he still tried to bargain with me on the point. Once the game started, he left.

The entire situation was frustrating to me, and it’s a scenario that I am sure most women who work in customer service-oriented jobs face. Not only was that conversation keeping me from being available to help other patrons, it also abused the consideration and hospitality that my job required. Either that man confused my general kindness for romantic interest, or he knew that I could not easily walk away from his flirting.

I have worked various customer service-oriented jobs since I was 15, and though this story was the only time I distinctly remember a patron trying to flirt with me, other uncomfortable things have been said to me. When I was a waitress in a small-town cafe, I was noticeably treated differently as a server than my male colleagues, especially by older men. Oftentimes it would be a “reminder” to smile, even though I always felt I was smiling on the job more than what was necessary.

Guys, I can assure you that 99 percent of the time, if a female service worker is being very nice to you, it’s because it is part of her job, not because she is romantically or sexually interested in you. I’m not saying that you cannot meet a potential partner this way. But if you try to get her number or suggest to meet up somewhere when she is not working and declines or looks uncomfortable, cut it out. I personally am at work to earn money, not find a partner.

Please stop flirting with women when they cannot move. Don’t put them in a double bind where they are uncomfortable with your advances but cannot ignore you or walk away, and if they do say no, feel like they risk being perceived as an incompetent service worker. Learn the difference between “I’m friendly because I am attracted to you” and “I’m friendly because it is part of my job.” Appreciate people in customer service jobs, and don’t make their experience more challenging because of your unwanted advances.