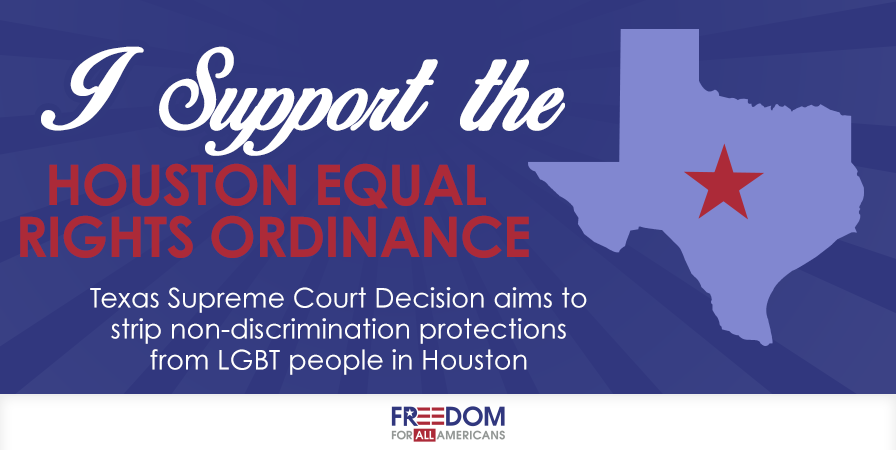 This week the city of Houston had the opportunity to make history in the Civil Rights movement with the HERO ordinance. The city failed to make these important strides forward with a 61 percent to 39 percent vote.

The HERO Act stands for the Houston Equal Rights Ordinance and it would have prohibited discrimination in public restrooms, thus allowing trans-people to use restrooms they are comfortable with based on their gender identity.

I think it’s safe to say the failure behind this failed ordinance is rooted in transphobia. Opponents of the ordinance said it made women more vulnerable to predators and former Houston Astros player Lance Berkman said transgender women are troubled men in a radio ad.

This negative attitude and ignorance toward the trans community is what causes crucial equal rights protections to fail in the state of Texas. It’s not like a sex predator could not currently walk into any public restroom they wanted, it’s not like they have some security guard checking everyone’s gender. It’s not like bathrooms don’t have stall that provide privacy.

There are still not a lot of these restrooms on campus in comparison to gender binary bathroom, but it is a start.

After this proposal was passed Tech’s campus did not have sex predators running rampant or mass confusion about where people are supposed to go to the bathroom, you know what happened? The trans community on campus felt safer and included on their college campus.

So thank you, Texas Tech, for making those strides in equality.

So now what? What can Texas do now that it has failed, once again, to be a leaser in the civil rights movement and increase trans inclusivity?

The first step is education, people in the state need to understand trans women are not “confused men” and the transition process. If people understood more about the trans community, these fears could potentially diminish and acceptance could grow.

Sometimes being a liberal activist in Texas is hard, but days like Tuesday when the HERO Act failed to pass showed me why it is so important to keep fighting for acceptance and equity in a state I care about so much. I hope in the future Houston, and the rest of Texas, tries again to be a hero for marginalized groups.