How I Went From An Uninformed Voter to a Voter Deputy

National Voter Registration Day was this past Tuesday and with the last day to register to vote being October 6th, that means that getting yourself registered is more crucial than ever.

I’ve never really considered myself a political person. I voted in my first election back in 2012 when President Obama was re-elected, but when I went to the ballot box the only candidates I knew anything about were the Presidential and Vice-Presidential candidates. I don’t even remember the other candidates I voted for. I was 18 and I was an uniformed voter, but I was still exercising my right.

Two years later, and now in my third year of college I’ve become a lot more active on campus. Through my campus’s feminist student organization I’ve learned the intricacies of not only voting, but what it means to be an active voter in Texas. I recently got deputized to register people in my county to vote and to do so I had to attend a training where I learned about all the voter restrictions that have recently been placed on Texas voters.

Prior to the 2006 election, no state ever required a voter to produce a government-issued photo ID as a condition to voting. But now a total of 34 states have some form of Voter ID Law in place.

In Texas these laws have only gotten stricter. In order to vote in Texas you need one of the following forms of ID:

In addition voters have to be sure that the form of identification they present, if expired, has only been so for a maximum of 60 days before Election Day.

As if obtaining one of those forms of ID wasn’t enough at the polls election officers have to check and determine whether the name presented on your ID accurately matches the name they have on their list of official registered voters. In Texas, that means if you’ve had a name change for any reason whether it being voluntary, because of a divorce, or even something as simple as having your middle initial included on one form and not the other, that could prevent someone from being allowed to vote.

If it’s decided that a voter doesn’t have proper identification they’re given something called a provisional ballot. It still allows them to cast a vote, but they have 6 days to present proper ID to the county voter register or their vote will not be counted.  What frequently happens is that the voter who receives a provisional ballot is not always aware of what that means, and because they were still allowed to fill out a ballot, they let those 6 days expire and their vote, unbeknownst to them, is not counted.

Sounds complicated? That’s because it is and it’s designed to be that way. Voter ID laws were put in place to make it as difficult as possible for certain demographics to vote —  including people of color, the elderly, low-income groups, and the youth. Why? Because if everyone from those groups had the ability to easily vote in elections they could easily sway their turnout.

This handy graphic made by a friend of mine, Adriano Perez, illustrates the power that the youth demographic could have if we all voted. 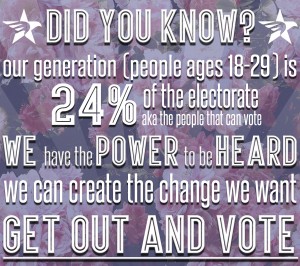 What I’ve learned through registering people on my campus to vote is that what is most important is not who we vote for, but that we vote at all. Our right to vote is given to us by the Constitution and has been fought for over and over again. The right to vote was extended to women in 1920, but it wasn’t extended to all women. The Voting Rights Act of 1965 granted the ability to vote to African Americans, but just because they had the legal right doesn’t mean it was honored. Civil Rights activists like Fannie Lou Hamer fought in the 60s to stop the beating and harassment of black people who simply registered to vote.

With voter restriction laws being placed all over the U.S., it’s a way of controlling once again who has the ability to be heard and who doesn’t. It also makes getting registered to vote and then actually exercising that right come November, that much more crucial.

If you need to register to vote, you can do it here.