I Am Pro-Choice Because I Am Catholic, Not In Spite of It 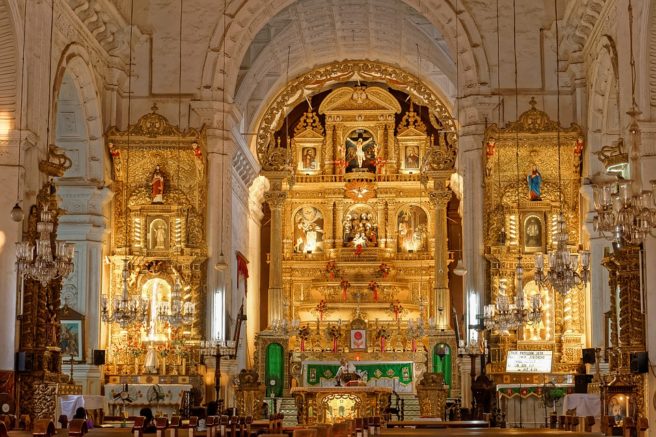 Catholics around the country have come together to express their support of reproductive rights through the In Good Faith campaign, put forth by Catholics For Choice, an organization that is “on the forefront of national and international debates on the intersection of faith, women’s health and reproductive justice”.

The beauty of Catholicism is that we are the original radicals- the first ones to question societal and cultural ideas and expectations. And I am here to tell you that I am a practicing cradle Catholic and concurrently, a pro-choice activist. In my own constructions and interpretations of theology, I believe that Catholics have a duty to be radically open to what is best for others.

Even so, abortion can be undoubtedly hard to come to terms with for some Catholics. At some point in their lives, a majority of us have felt like we are moving away from the doctrines taught in Sunday School, those regarding abortion and beyond. It’s somewhat disillusioning to think of yourself as somehow outside the church. The misconception many Catholics hold is assuming every stance the church has offered for every issue is the absolute word and will of God. In reality, Jesus didn’t say much of anything on a fair amount of contemporary issues. I am by no means saying that we must abandon the direction of the Vatican or the church, but instead that we need to view teachings through a holistic lens that takes into account what we believe Jesus would have wished for. We must take each opinion of the church with a grain of salt and use our own judgment and faith to understand presented issues.

Most Catholics who feel sinful for their contrasting views don’t realize that the Bible does not express a stance on abortion. I kept my identity as a pro-choice Catholic quietly in the back of my mind, but I have come to see there is no shame in these two identifiers co-existing. Abortion is consistently viewed in black and white terms. But what many don’t understand is that these hot button issues must be viewed in shades of gray, with empathy. To me, abortion is a reality and the right choice for many people.

Now is when every single Catholic who is pro-life comes to the comments to make the “Not all Catholics” assertion, that I am a minority within our population. I am not here to say that the entirety of young Catholics is pro-choice. I respect the opinions of anti-abortion Catholics everywhere, and I feel grateful that within our faith there are people who are willing to fight for what they believe in.

But, I also believe that they fail to see why abortion is necessary.

Jesus was the original Christian radical feminist. He would firmly agree that women should be able to live without fearing motherhood. Some women are able to live their most fruitful and faithful lives without children, and that is okay. Jesus was accepting of this notion. What he would stand against would be people other than a woman and her doctor- specifically the church- making decisions for women.

The first time I really understood my duty to be an outwardly pro-choice Catholic was the passage of House Bill 2, some three years ago. This law was recently overturned by the US Supreme Court, but the fight did not cease in Texas while it was in place. HB2 closed a majority of the state’s reproductive health clinics, restricting not only Texan’s abortion access but also their healthcare. The clinics that did stay open were in predominantly wealthier areas. The closure of clinics in poorer areas essentially means that reproductive healthcare, not just abortions, is a luxury that only wealthy Texans could access.

The question asked to the Supreme Court was whether or not this bill created an “undue burden” for women. They took a stand to say that it was undue, as it is truly undue to ask a woman to travel hundreds of miles for her rightful care. I spoke to a woman in 2015 about the story of a girl who came into a clinic in Texas that did not perform abortions. She was fifteen and had been repeatedly raped by men in her community. After becoming pregnant, she sought help from a local clinic, who had to tell her that they were not legally allowed to perform the procedure on her. Her only option was to travel for it to be done, which was out of the picture. What the legislation had essentially done was condemned her to motherhood. The argument that “a majority” of women use abortion as birth control is outlandish and insulting to women’s decision making as a whole, especially considering we seem to think we know women’s bodies and wellbeing better than the woman does.

Looking back at the teachings of Jesus, we recognize that Jesus was a feminist. He wanted what is truly the best for women, and I firmly believe that one of the ways that he would have wanted that was through giving women choice in ending a pregnancy and access to contraceptives. Understanding that the Church’s views on abortion are less than two hundred years old and entirely political helps to separate the Church’s expressed opinions from what Jesus thought about feminism and a woman’s right to reproductive services. Just as we have to understand frivolous issues in the Bible, like wearing clothes of mixed fabrics (Lev. 19:19) – we must observe reproductive justice through both a biblical and a modern lens.

One of the most prominent arguments for Catholic choice is the issue of what happens when we take choice away from women. The cat is out of the bag with abortions: women are going to get them whether it be through legal and safe means, or through life-threatening situations. With that, being pro-choice does not necessarily mean pro-abortion. Abortions can feel daunting and shameful, but can also be the best choice. We must lift the women choosing to make this decision up instead of shaming them for ultimately making their own choice. Understanding that abortion is something that will take place whether it is legal or not is vital. The horrendous implications of illegal abortion are rarely considered in any pro-life argument. We have a duty as Catholics to understand the absurdity in lobbying for abortion restriction in the name of “saving lives.” If you really would like to save lives, know that many lives are put in danger as a result of abortion restriction resulting in illegal abortion.

Even if you still cannot resolve being pro-choice and being Catholic, consider advocating for comprehensive sex education in all communities. If you want to prevent abortion, then understand that we have a duty to provide Catholics and non-Catholics who are choosing to have sex with contraceptives. If you want to keep abortions rare, you and all Catholics must be fearless advocates for sex education and contraception within your communities and beyond. As I said before, to be pro-choice does not mean you are pro-abortion. There’s a reason the two sides to this debate are “pro-life” and “pro-choice,” not “anti-abortion” and “pro-abortion”. There is no doubt that abortions produce a range of emotions, from joy, to fear, to relief, to guilt. But we must also recognize that forced motherhood evokes this same range of emotions on an extreme and much longer timescale.

Catholic Women are not the same women that they were when Jesus was alive. We are just as robust and powerful as the women of the Bible, but we also live in a society that is tenfold more accepting of our identity as strong women. We have the ability to speak out against social injustices across all boards, whether they be feminist issues or those of other minorities. It is now time for us to be advocates for women everywhere.