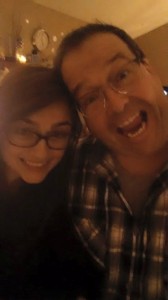 The man who taught me how to be a squeaky wheel

When I was in high school, I asked my dad why we hadn’t played tennis together in a while, despite the fact that I had mentioned wanting to months earlier, but that he had gone to the park to play pass with my younger brother multiple times during those months.

His response? “The squeaky wheel gets the most oil.”

I had no idea what that meant, so he explained. My brother kept asking to go to the park and play, so he kept getting what he wanted. Meanwhile, I had only asked for what I wanted once. I just thought that once was enough and that we would eventually get around to playing.

Honestly, that was unrealistic. I’m the oldest of four, and we all have our own needs and wants for my parents to try and juggle. If I really wanted to do something, I should have spoken up more, not just expected him to remember something I had casually said seven months ago. But I didn’t want to come across like I was pestering or begging him, because I didn’t want to be annoying. But he was right.

Not only did he destroy me in a tennis match the following week, but he also gave me some of the best advice I’ve ever gotten.

Be the squeaky wheel!

There is nothing wrong with speaking up over and over again until you get your voice heard and your needs met. Has there ever been a successful social justice movement where someone said what they wanted once and then that was it?

No. There hasn’t been. Martin Luther King, Jr. did far more than his I Have a Dream speech. Gloria Steinem didn’t just say a few words and then quit. The #BlackLivesMatter movement would never have gained so much momentum if they had only rallied together once. Wendy Davis stood for hours in her filibuster to try and prevent strict bans on abortion in her state, and while the bill was ultimately signed anyway, she didn’t stop—she ran for governor of Texas!

My point is this: we have to go after what we want to make change happen. We have to scream until our throats are raw and fight until we are exhausted, because that’s how these battles are won. In the midst of a state by state strategy to dismantle reproductive rights in this country, we have to remember this. It takes a lot to get our voices heard and our needs met, but it’s worth the struggles and the yelling and the setbacks to get justice.

So go out and be the squeaky wheel. Squeak until you get the treatment and the rights you deserve!